We clear up the confusion on paying service charge in Malaysia and your rights as a consumer. 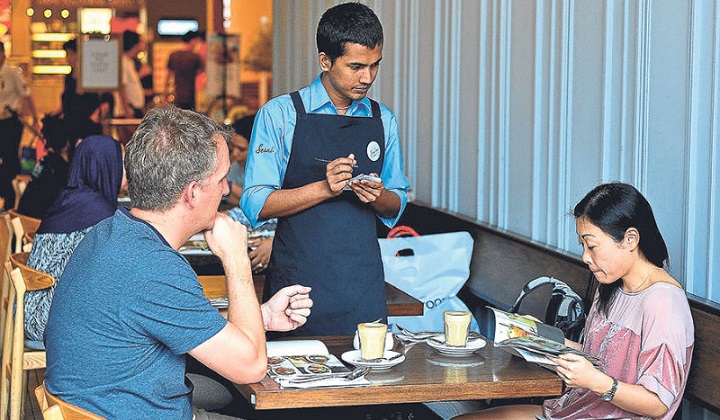 Service Charge has long been the bane of customers who often find a 10% fee slapped on receipts after dining in a restaurant or checking out of a hotel.

According to the Malaysian Customs Department, Service Charge is a – well – charge imposed on the cost of goods or services imposed by business in a bill. This is normally applied in the hospitality industry, usually at a rate of 10% though the amount differs across various establishments.

The money collected from the Service Charge is accumulated and pooled into a fund to be paid to the workers.

Do take note that Service Charge is different from the Sales and Service Tax (SST), sometimes known as Service Tax. The Service Tax is fixed at 6% and can only be imposed by businesses in the hospitality industry under license by the Customs Department.

This tax is imposed as stipulated by the Service Tax Act 1975 and it is paid to the government once every two months. Essentially, they’re collecting it from customers on behalf of the government.

Service Tax is not imposed on the Service Charge, but on the cost of goods or services provided.

Why does Service Charge even exist in Malaysia?

Service Charge is a replacement for tipping, though not necessarily so.

When we asked the Malaysian Association Hotel Owners (MAHO), they told us that the Service Charge is a practice of over 50 years by a majority of hotels in lieu of taking tips from their guests.

They distribute the collected amount to “deserving staff based on points system.” Depending on position and seniority, staff will be given a number of service points.

In Malaysia, the general practice is that the Service Charge is distributed to non-management level employees. This practice was later adopted by restaurants to cover employee wages.

It should be noted that the Service Charge cannot be used to pay minimum wage and the 10% charge must be stipulated in the collective agreement (CA) between employers and employees before businesses can impose it.

Does the money really go back to the workers?

For the most part, yes.

A Putrajaya restaurant owner who wishes to remain anonymous told us that most restaurateurs do distribute the amount among the staff, though he’s heard of unscrupulous establishments who keep the collected Service Charge instead.

It should be noted that this is an offence under the Anti-Profiteering Act 2011.

Okay, so can I refuse to pay Service Charge?

Unfortunately, we’ve got some bad news for you.

A customs senior director later told TRP that patrons should pay the Service Charge since they receive a service from the restaurant like serving meals and cleaning tables.

If there is no indication of a Service Charge upfront, you do have a choice to decide if you want to pay the 10%.

You still have rights as a consumer under the Consumer Protection Act 1999 which indicates that there is implied guarantee as to reasonable care and skill, time of completion and price.

As a customer, you can opt to discuss with the manager to have the charge removed or file a complaint with the Ministry of Domestic Trade and Consumer Affairs.

The future of Service Charge

The public interest in Service Charge ebbs and flows with the conversation of SST and Goods and Service Tax (GST) implementation.

In a 2018 report by Free Malaysia Today, former Finance Minister Lim Guan Eng said that the 10% Service Charge was too high and that operators should lower it.

He argues that the government has given relaxations to businesses, such as raising the Service Tax threshold to RM1.5 million and above on food and drinks and tax exemption on the rent for small stalls and food shops.

While many may echo his sentiment, workers in the hospitality and services industry are generally in favour of keeping the Service Charge.

When speaking to restaurant workers in Petaling Jaya, Malay Mail found that many workers depended on the Service Charge to survive – even with a basic salary of RM1,200.

MAHO also indicated to TRP that hotel employers are now choosing to go on a clean wage system where all allowances are merged into one fixed salary.

This decision is made due to the implementation of the minimum wage in 2013 and subsequent court ruling that the Service Charge collected cannot be used to pay the minimum wage. However, hotels facing strong objection from unionised staff are currently settling the matter in industrial courts.

So, for now at least, it looks like the Service Charge is here to stay.