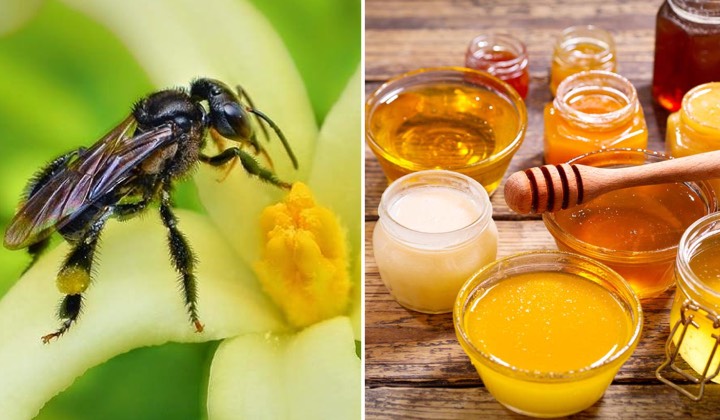 Recently, I bought an expensive bottle of what the stall keeper told me was raw Sabahan honey.

He told me that I should avoid taking it with a metal spoon, or in hot water. And instead, recommended that I consume it every morning with a little bit of raw garlic.

The sweet-food loving person that I am considered the idea of mixing this perfectly sweet-tasting, expensive honey I just bought with garlic to be abhorrent. Meanwhile, the skeptic in me questioned whether a spoon could really affect the health benefits of honey.

So, I did a little digging online, and hereâ€™s what the science says about some common honey myths.

Never use a metal spoon to scoop honey

Actually, itâ€™s the honey affects metal spoons. Not the other way around.

Apparently, honey has a slightly acidic pH which reacts with metallic surfaces. This reaction may damage and affect the healing properties of honey. But, it takes a while – like if you leave a metal spoon in a jar of honey overnight.

But just dipping and scooping honey with a metal spoon is fine cause theyâ€™re only in contact for about 2 seconds.

As such, this popular myth is generally false. You can use any spoon to scoop honey.

A study investigated the health benefits of garlic and honey along and in combination against certain types of bacteria grown in the lab, including those that caused pnemonia and food poisoning such as streptococcus pneumonia, staphylococcus aureus and Salmonella.

A separate study found that combining garlic juice and honey could even stop some types of bacterial infections that canâ€™t be treated using antibiotics.

It should be noted that these studies werenâ€™t done on humans, as such more research is required to see if they have the same effect against infection in the human body.

It turns out, you donâ€™t necessarily need to take both garlic and honey-like the stallkeeper specified though.

Instead, you can try adding some fresh sliced garlic to a salad and combine honey in the salad dressing. Or, you can cook meat marinated in garlic and honey and still get the full health benefits of both.

It is thought that hot water may destroy some of the healthy things contained in honey.

But this largely depends on whether youâ€™re using raw honey or regular store-bought honey.

Which, incidentally takes us straight to our next section!

What is â€œrawâ€ honey and how is it different from regular honey?

Raw honey is only extracted from the hive, filtered through a mesh or nylon cloth to separate impurities (like bits of honeycomb and dead bees) and then bottled and sold.

In contrast, regular store-bought honey is processed with several more steps before itâ€™s bottled, including pasteurisation and filtration.

The pasteurisation process involves heating honey for some time to destroy yeast, extend its shelf life and make it smoother. Meanwhile, the filtration process further removes impurities like debris and air bubbles. This makes the honey look clear on the shelf – an appearance thatâ€™s more appealing to consumers.

Therefore, adding pasteurised honey to hot drinks will not affect its nutrients because theyâ€™re already destroyed. For raw honey, it depends on the temperature of the beverage.

Fun fact: Raw honey never expires due to its water content and acidity. Honey is only 17% water and has a pH level of about 4. Therefore, it contains less water than most bacteria and fungi and tends to dehydrate and inhibit their growth.

That being said, whether you have raw or store-bought honey, thereâ€™s one thing that processing does not remove: the bacterium Clostridium botulinum.

Honey naturally contains spores of this bacterium and traces of it has been found even in pasteurised honey. The bacterium is natural and harmless to almost all adults and children – except for babies below 12 months old.

A babyâ€™s digestive and immune system isnâ€™t fully developed yet during this time which can cause them to contract botulism from both raw and regular honey resulting in sickness or even death.

Local raw honey contains pollen and this repeated exposure to pollen is believed to build immunity to some seasonal allergies.

Besides pollen, raw honey also consists of propolis and a range of other substances which together contains a variety of highly nutritious things like vitamins, amino acids, essential fatty acids, micronutrients, phytonutrients, minerals, and enzymes.

These compounds have been linked to an array of impressive health benefits, including reducing inflammation, improving liver function and lowering the risk of heart disease, stroke and certain cancers.

Some kinds of honey also have antiviral properties which may help treat or prevent colds, flu, and other illnesses caused by viruses.

Regular store-bought honey is believed to be missing many of these exceptional enzymes and antioxidants, as well as that special pollen, due to the pasteurisation and filtration process.

Did you know that Malaysia has our own special type of honey?

Sarawak, Sabah, Johor and Melaka produce locally made honey called kelulut honey, named after the type of bee that makes it – stingless bees a.k.a lebah kelulut.

Thriving in tropical and sub-tropical countries, there are over 500 species of stingless bees in the world, with 40 species found in Malaysia.

Stingless bees differ from honey bees by their highly reduced stingers which cannot be used for defence, rendering them pretty harmless to humans.

Besides that, the hive wall of stingless bees is made from propolis, instead of wax (honey bees hives are made of wax), they produce less honey compared to honey bees and their honey is also not as sweet. However, stingless bees are more resistant to diseases and parasites that affect honey bees.

So, you could say that these bees might be making our countryâ€™s very own superfood.

Beekeeping also plays a major role in enhancing local biodiversity through pollination – with stingless bees known to contribute to the national forestry industry by pollinating cengal, meranti and merbau trees.