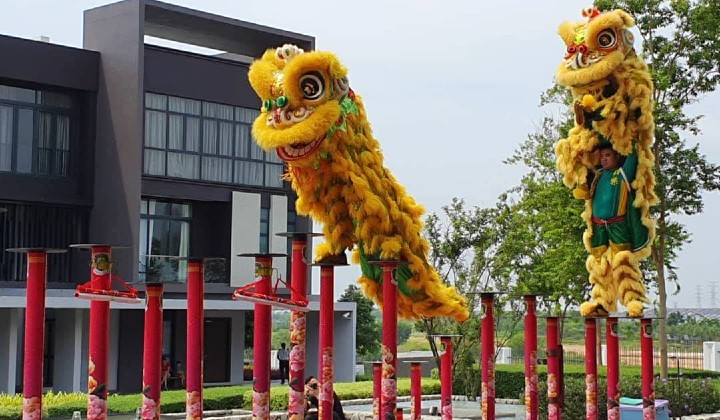 Every Chinese New Year, there will be lion dances everywhere. These stunning performers dance and jump around to the beat of clashing drums and cymbals, carrying a large and heavy “lion” head.

Sin Chee Tack, manager of Yuen Wei Dragon and Lion Dance Group, says that the lion dance is unique welcomed by all Malaysians regardless of race.

Lion dances in Malaysia are widely accepted and recognized within all the ethnic groups because they represent the “bringing of fortune”.

He says that many events hire lion dance troupes to create a bustling, excited atmosphere.

They perform at weddings, grand openings, office parties, birthdays, and even once during the arrival of a VIP for a corporate event.

But did you know that the breathtaking high pole lion dance is a uniquely Malaysian invention?

A man called Master Siow Ho Phiew is hailed as the inventor of the high pole performance, which was praised for adding a vertical dimension to showcase the fluidity and agility of the lion dance.

Eventually, as the performers got more skilled, the height of the poles were raised and more complex moves were added.

In 1992, together with the Muar Kunsengkeng, Master Siow Ho Phiew brought the high pole lion dance to the international stage.

Since then, the high pole lion dance is internationally known to be part of Malaysia’s unique charm and a testament to the ingenuity of the Chinese Malaysians.

We spoke to Albert Fong, a trained performer now coach and deputy president of the Khuan Loke Dragon & Lion Dance Association to find out more about this.

Because of how popular the art was in the country, there are actually three different federations in Malaysia that host competitions which continuously pushes lion dance to greater heights.

In fact, globally, the most prestigious and well-known lion dance competition is held biennially right here in Genting Highlands at the Genting World Lion Dance Championship! 36 of the best lion dance troupes from 15 different countries came together to compete for the championships in 2018.

Malaysia is so well-known for our high pole lion dancing that Malaysian lion dancers even coach teams in other countries.

In fact, we have a Hawaiian team training with us here in PJ!

However, countries like China, Taiwan, Singapore, and Myanmar are catching up to us quickly and are improving very fast.

Albert says that many of these teams have invented new techniques and moves to be used in the competitions.

Malaysians may be so used to seeing high pole lion dances that they forget the sheer athleticism performers have to possess in order to perform such moves properly. It’s turned from a street cultural dance to an extreme sport.

If the dancers are physically fit and brave enough, they can start high pole lion dance immediately. However, the performer has to jump 1.8m, and that distance makes beginners afraid.

Should we worry that interest in the high pole lion dance would wane? Probably not, since Malaysia has won the Genting World Lion Dance Challenge Cup a full 13 times in a row.

In fact, there is a movement to get the high pole lion dance recognized by UNESCO as an Intangible Cultural Heritage, which would be another addition to the list next to Malaysia’s Mak Yong theatre, Silat, and Dondang Sayang. If you’re interested, you can sign the petition [here].