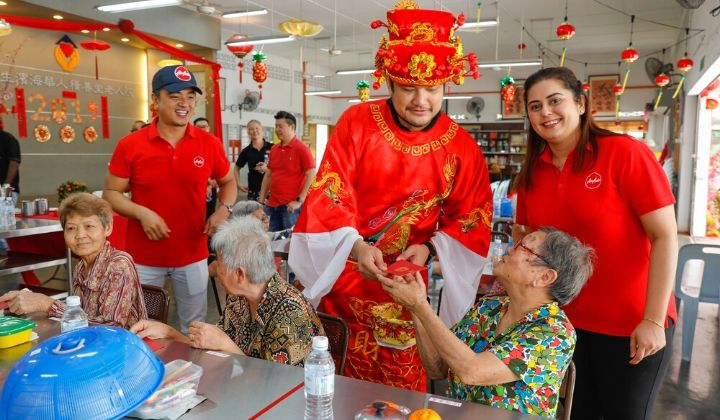 It’s widely known that for the Chinese, everything good is associated with the colour red. You see it in the malls and at home during Chinese New Year; even at special functions like weddings and housewarmings.

There is also another decorative element that may not be as prominent as the colour red, but is always present at these happy occasions.

Most things come in pairs or doubles, like couplets and greetings (because “gong xi” alone is never enough, so we say “gong xi gong xi”).

It all starts with the number “two”

To understand the importance of pairs and doubles for the Chinese, we need to first talk about what the number “two” means to them.

“Two” is a number that is pretty much integral in the lives of the ancient Chinese people. They believe that there are two realms (heaven and earth), that our lives are governed by two opposite forces (yin and yang); and that a marriage is only between two people.

The number is also regarded as a lucky number as it sounds like the word “easy” when pronounced in the Cantonese dialect. Superstitious groups especially love the number 28 because it sounds like “easy to prosper” in Cantonese.

As such, “two” is more than just a lucky number for the Chinese – it’s a number that symbolises harmony, balance, and their way of life.

In all Chinese dialects, the number “two” also means pair and double. And since the popular Chinese saying states that good things always come in pairs (好事成双) – it’s always a good thing to have things in sets of two.

An example of including the element of pairs and doubles in celebrations is the Double Happiness symbol commonly seen during weddings. The symbol was created by putting two of the same Chinese word for happiness side by side, which represents double joy and luck.

There is also a practice in certain parts of China where married daughters are expected to double their gifts when they visit their parents.

During Chinese New Year, the element of pairs is represented in the form of spring couplets. These are well wishes or festive phrases written on two sets of red paper, which are usually hung on both sides of a door or window.

Chinese New Year presents are also traditionally given in pairs

Because good things come in pairs, gifts should too. If it’s not in pairs, then it would at least be in even numbers. This is because even numbers are also made up by pairs, like how eight mandarin oranges can be ‘interpreted’ as five pairs of them.

However, it’s important to note that you cannot gift the same item in quantities of four. Though it’s an even number and technically also in pairs, four is arguably the most unlucky number in Chinese tradition as it sounds like the word “death”.

Following this tradition, AirAsia is giving out their Chinese New Year promos in pairs as well

AirAsia is having a Double Up On Happiness sale for Chinese New Year, in which Malaysians are given double “gifts” in the form of travel deals and discounts. Here are some of the pairings we spotted:

AirAsia is working together with the Ministry of Transport to provide low fixed fares (from RM149) during the Chinese New Year season. This makes it more affordable for Malaysians to travel back to their hometowns and spend time with the family.

And since going home is always a happy occasion, AirAsia wants to double up the joy by offering you a feast onboard. They’ve just introduced a special Chinese New Year meal – serving Prosperity Tomato Egg And Fish Stew with rice along with pineapple tarts as dessert – all from RM12.

No harm starting the festivities early!

On top of saving on your basic flight fare, AirAsia is allowing you to double up this deal with a 10% discount on all seat selections. So how about allowing yourself this mini luxury of choosing your preferred seat (we prefer the window seats in front).

We previously wrote about how booking your flight and hotel together as a bundle saves you quite a bit of money. So if you’re a smart shopper like yours truly *wink*, you’d be happy to know that there are promo deals for AirAsia’s SNAP flight + hotel bundles too.

A 3D2N trip to Belitung starts from RM171 if you SNAP your flight and hotel together. Feel free to shop for as many souvenirs as you want, as you can “double” this travel deal with 10% off checked baggage that are 25kg and above on AirAsia flights.

Sharing the joy helps to double up the happiness too

There’s a common saying that goes “a joy shared is a joy doubled”, and the simplest way to share the joy during Chinese New Year is to send good wishes to someone.

What we found out was that there are some promo codes that AirAsia wants you to “earn” by sharing the joy. These codes are known only to AVA, their virtual assistant – and you can get them by sending Chinese New Year wishes to AVA.

We tried it out ourselves:

So what you need to do is:

There are five different hashtags that will prompt AVA to provide you with promo codes: #gongxifacai, #doublehappiness, #abundance, #prosperity, and #goodfortune.

Different greetings will get you different promo codes, so feel free to try them all.

Because sharing is caring, and it can double your joy as well as happiness this Chinese New Year.

These promos are provided by AirAsia to double up your happiness this Chinese New Year. Send AVA a Chinese New Year wish on AirAsia’s Facebook today to get your share of CNY discounts.

What Is The “Ghost Month” And How Does It Affect You?