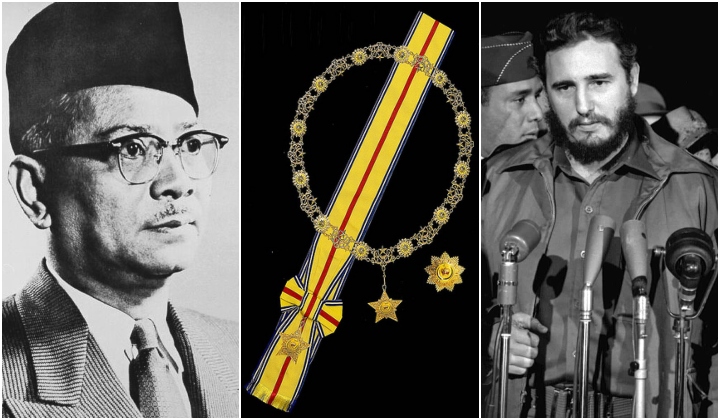 Malaysia titles and awards are complex and confusing.

Most people assume that someone who given the title of “Tun” has been awarded the highest possible rank in Malaysia. But in reality, this is far from the truth.

A “Tun” is a title given when someone receives a high-ranking federal award, given only by the Yang di-Pertuan Agong or a Yang di-Pertuan Negeri to those who have done a great service to the country.

But a “Tun” isn’t the highest-ranking award someone can receive. In fact, there are three awards that rank higher than a Tun, Tan Sri or a Datuk Seri and interestingly, these awards don’t even carry any titles.

Also known in English as the Grand Knight of Valour, this award is the highest federal award that can be granted in Malaysia.

It was created in the 1960s by Sultan Hisamuddin Alam Shah and is awarded to Malaysians who have shown supreme courage and bravery in extraordinary and highly dangerous situations.

The number of awards given out is not limited and those who receive it also receive a monthly allowance which ends when the recipient dies.

Surprisingly, the amount received isn’t that much, a measly RM400 a month (not even minimum wage). Upon the death of the recipient though, their next of kin receive an RM20,000 lump sum payment.

To date, a total of 30 people have received this award, with most being members of the military or police force who had put their lives on the line to protect the country.

The first person to ever receive this award was Royal Malaysian Police Special Constable Velu Rajavelu in 1963 for his bravery and community service when he was killed in the line of duty combating piracy in Klang in 1962.

The only civilian recipient is Abdul Jalil Ibrahim, the assistant general of Bumiputera Finance Berhad (BMF) who had travelled to Hong Kong and was murdered there while investigating an infamous scandal.

The second-highest federal award is the Order of the Royal Family of Malaysia which is only conferred to Malay rulers who were appointed as the Yang di-Pertuan Agong (puts the Pahlawan Gagah Perkasa award into perspective, doesn’t it).

So, it might be comforting to know that currently there are only four living recipients, Tuanku Syed Sirajuddin Putra Jamalullail of Perlis, Sultan Mizan Zainal Abidin of Terengganu, Sultan Muhammad V of Kelantan and the current Yang di-Pertuan Agong, Al-Sultan Abdullah Ri’ayatuddin Al-Mustafa Billah Shah.

To date, 13 people have been conferred this award.

The Order of the Crown of the Realm was established in 1958 and can only be conferred to 30 living recipients at any time.

This honour is granted to the Raja Permaisuri Agong (Queen), newly appointed Malay rulers, foreign Heads of State, as well as other distinguished individuals.

Fun fact: Tunku Abdul Rahman also received this award. So, although he was never a Tun or Datuk Seri, he actually held an honour that was higher than these two, only it did not come with a prefixed title to his name.

Tunku Abdul Rahman and Tun Abdul Razak Hussein are the only two Malaysians who weren’t a Sultan, a Raja Permaisuri Agong, or a Yang di-Pertuan Negeri on the list of 55 Malaysian recipients.

As mentioned above, a total of 67 foreign Heads of State have been conferred this award as honorary recipients, including the late President of Cuba Fidel Castro and Sultan of Brunei Hassanal Bolkiah.