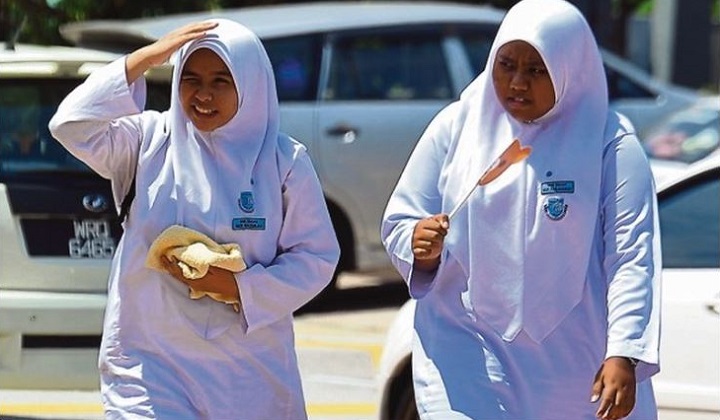 The weather seems to be rather strange lately isn’t it?

One week, it’s a chilly 22°C, the next is hell on earth with a blazing sun heating up our cars parked illegally by the roadside. Then, suddenly showers of rain come along to send our cars floating down the road.

If you’re wondering what the heck is happening, we asked weather experts to explain Malaysia’s weird weather.

Every year from November to March, Malaysia experiences the Northeast monsoon season that brings winds blowing across the South China Sea and heavy rains along with it.

However, Prof Fredolin Tangang, Chairman of Department of Earth Sciences and Environment at Universiti Kebangsaan Malaysia, explains that the monsoon migrates in this period and causes the weather to behave differently at different points in time throughout the season.

The monsoon actually migrates south from southern Vietnam in early November to Java, Indonesia around January.

Around mid-November to mid-December, the moisture is transported from South China Sea and released over Peninsular Malaysia. Then, it gets dumped over Java island in Indonesia, which is why we saw floods in Jakarta on New Year’s.

With the absence of cloud and moisture over Peninsular Malaysia, there is minimal rainfall and higher incoming solar radiation (insolation) which increases the air temperature. Hence, the heat.

This phenomenon is not unusual for us though; it happens every year at seasonal time scales, with variations from year to year. But, there’s actually another very interesting weather phenomenon that happens at the same time.

Apparently, Malaysia experiences a weather disturbance once every 20 to 60 days called the Madden-Julian Oscillation (MJO).

MJO is essentially a moving ball of clouds, rainfall, winds, and pressure that crosses the equatorial region of the planet towards the east.

Prof Fredolin explains that the MJO propagates from the Indian Ocean to Pacific Ocean, crossing Malaysia along the way. The MJO has two phases, enhanced rainfall and suppressed rainfall, so our weather is affected depending on the phases that cross over the country.

As the eastward clouds head into Malaysia (mid-January onwards), it fills in the gap left behind by the Northeast monsoon clouds and brings rain once more.

But once these MJO clouds blow over, combined with the leaving Northeast monsoon, Malaysia is back to having dry weather.

But it’s raining even though it’s hot?

The heat causes higher condensation, so the rain tends to become heavier. An extreme case of this phenomenon is the formation of “rain bombs” where rising hot air mixes with rain drops in the atmosphere.

This lowers the air temperature rapidly and the cooled air quickly sinks, gathering speed and pulling the rain with it into a forceful downpour over a small area. The storm hits fast and hard, with strong winds accompanying the torrential rain. This event has been observed in Penang in 2019, though mild.

Why does it feel hotter than before though?

When we asked Dr Renard Siew, climate change advisor to the Centre for Governance and Political Studies (Cent-GPS) about the erratic weather pattern, he only had one thing to say : Climate crisis.

We will continue to experience both warmer temperatures and stronger storms and rainfall throughout the year in Asia Pacific due to changes in jet streams -fast flowing, narrow, meandering air currents in the atmosphere.

The jet stream typically helps to keep cool air near the poles and warm air near the tropics, but Dr Renard warns when it swings out to make a dramatic bend, it can carry pockets of warm air up north and cool air down south.

Think about what happens when your brain goes haywire. It disrupts your bodily functions.
Likewise, when these jet streams go haywire, they lead to uneven distributions of heat throughout Earth’s surface.

Prof Fredolin echoes this sentiment and says that by 2040 or so, the global mean temperature is projected to be 2 °C warmer than the pre-industrial period.

This will increase the likelihood of drier conditions annually over Kalimantan, Sumatra as well as Peninsular Malaysia, to the level similar to what we experience during El Nino period.

He also warns that we could see more forest fires and haze.

What Does The Equinox Have To Do With The SUPER Hot Weather Lately?