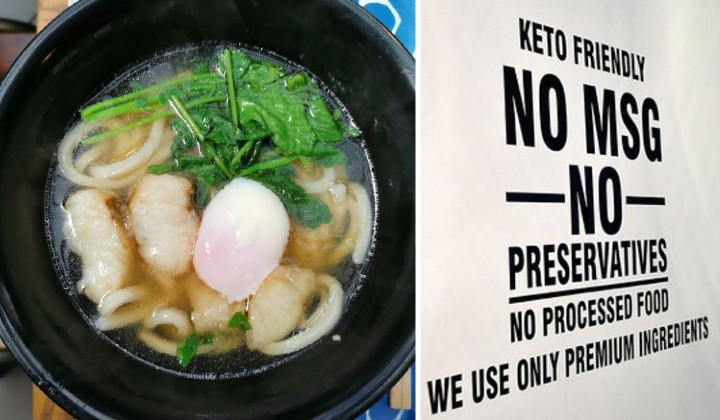 Do you have or know anyone with an allergy to MSG? The panic surrounding MSG has been around for decades, with people claiming that it gives them all kinds of strange symptoms after consumption.

In 1907, he began research on a traditional Japanese seaweed broth after he tasted how delicious the dashi broth was with the addition of kelp.

MSG is the chemical basis for the umami (savoury) flavour- one of the five basic tastes along with sweet, bitter, sour, and salty. Ikeda then named it Ajinomoto, the “essence of flavor”, and in 1907 invented and patented the process of mass-producing MSG in its more common salt-form.

However, the glutamic acid is naturally present in our bodies, and in many natural foods. In fact, MSG is long been part of our diet- we just didn’t have a particularly name for the thing that makes food taste really good.

The amino acid glutamate is found in meat, eggs, cheese, tomatoes, fish, seafood, sauces, and almost everything else we eat. The more free (unbound) glumate there is, the more umami flavour there will be.

So why all the fuss?

The first mention of MSG appeared in a letter published in the New England Journal of Medicine in 1968 by Dr Ho Man Kwok, describing the “Chinese Restaurant Syndrome” of numbness in the neck, weakness, and palpitations after eating at Chinese restaurants.

According to Colgate Magazine, however, was that Dr Ho Man Kwok was actually Robert Steel, writing the letter with a fake name from a fake medical institution on a dare for $10.

Historically, the New England Journal of Medicine published letters of satire for a knowing audience, and responding letters from other doctors seem to point that Robert Steel’s “Chinese Restaurant Syndrome” letter was correctly identified as a joke piece.

Unfortunately, the letter took off and exploded when mainstream media who weren’t in the know picked it up and reported it, as fear is often the fastest driver of misinformation.

Another reason for this fear was the tension within America at the time. In the late 1900’s, America was coming to terms with over a century’s worth of racism and exclusion of the Chinese people.

It was only in 1943 that the Chinese were allowed to immigrate into the US for the first time since the Chinese Exclusion Act of 1882. However, internalized racism lives on, and the general public latched on to the Chinese Restaurant Syndrome to make digs on the Chinese identity and their stereotypical food.

If MSG is so natural, why do I get the so-called “dry mouth” after Chinese food?

Despite the overwhelming fact that MSG is heavily prevalent in all foods such as pizzas, potato chips, burgers, and everything else, Chinese food still tends to be the unfortunate culprit of “MSG syndrome”, even within Malaysia.

Dai chows and soup noodles are commonly cited to contain “a lot of MSG”, with patrons then later complaining of everything from headaches and a dry mouth to difficulty breathing.

However, the human psyche is a tricky thing. Confirmation bias and the self-fulfilling prophecy affirms your subconscious belief in the Chinese Restaurant Syndrome.

Even if you don’t believe in the Chinese Restaurant Syndrome, it’s easy to link any feeling of discomfort to recently-eaten Chinese food, because it’s a convenient explanation with a strong correlation that has already been reinforced numerous times in your life.

Yet, you may not make that same kind of connection even if you feel incredibly thirsty after a large burger, because your subconscious has never made that mental link between MSG and a burger before.

How do I remove that negative bias?

Simple: The next time you consume Chinese food and feel thirsty after, consider other factors: the food may be dry or salty, the weather may be hot, or you may simply not have had enough water that day.

Ajinomoto is not your enemy. Numerous studies have been done that prove MSG has no negative effect on us.

Correlation does not equal causation, and to keep an open mind about other reasons for your “Chinese Restaurant Syndrome” could possibly help you feel a lot more comfortable in the long run.

For more information on the secret racist history of MSG, watch our video here: