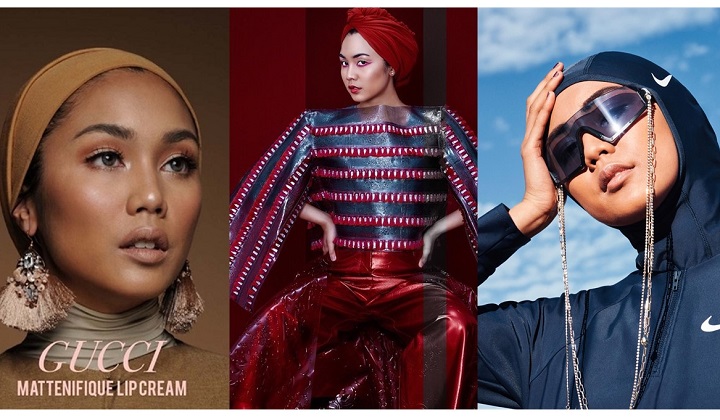 When news broke of a Malaysian model headlining Nike’s global campaign for their first ever modest swimwear line, little did Arinna Erin Wira know how much her life would change.

Suddenly, the 25-year-old was catapulted into the spotlight as the entire nation cheered her success in becoming Malaysia’s first international hijabi model.

While the feat is worthy of admiration, the London-based Selangorian reveals to TRP the story behind her global success.

Honestly, I didn’t think it (Nike campaign) would’ve been a big deal at first. Like, who am I to even be standing with these crazy talented women?

The crazy talented women that Arinna refers to are Zahra Lari, a professional figure skater from UAE and Saudi Arabia’s first female technical diver, Nouf Alosaimi, whom she joins as the faces of the Nike Victory Swim Collection.

How exactly did a girl from Petaling Jaya get selected for Nike’s global campaign after 5 years in the industry? As the story goes, the opportunity came as a total surprise to Arinna.

One day, I was contacted by a casting director who asked me if I was free for 3 days to shoot for Nike in Spain.
The main question they asked was â€œcan you swim? Without hesitation, I said yes!
Good thing I loved swimming though! If I couldn’t, I would’ve gone to the nearest swimming centre in London and forced myself to learn.

And so, Arinna flew out to Spain in what was her first international voyage for a shoot and describes the entire experience as amazing.

I felt super humbled to be surrounded by such amazing and successful women who are so passionate in what they do. It made me want to work even harder in life.
Of course, there were many many moments when I thought to myself: Why am I even here?

As she says, “everything happens for a reason” and Arinna incidentally found herself becoming a Malaysian representative on the global stage.

I still don’t know what to make of it because I’ve never gotten that much attention in my life. I’m glad I made my country proud, but the entire time I was just hoping to have made my parents proud.

In fact, she credits much of her success to her parents, believing that their blessings opened the doors to the opportunities she received. She expressly told TRP how much of an impact they’ve made on her, from driving her forward in her education to building her self-esteem.

This self-esteem certainly comes in handy as Arinna has now inadvertently become the face of female empowerment and also part of the conversation of female Muslim athletes’ contentious relationship with the sporting world on their attire.

In 2019 alone, we’ve seen this issue rear up on two opposite ends. In October 2019, a Muslim student athlete in the US was disqualified from a race for wearing a hijab. Closer to home, the Terengganu state government announced their decision to withdraw their athletes from rhythmic gymnastics and women’s gymnastics in September 2019 due to concerns over their attire and movements.

Reflecting on this, Arinna expresses disappointment on the policing of women’s attire.

There’s so much we can do but we’re limited to the things we wear on our heads or that we’re not deemed to be dressed appropriately because “they” say so. Women for generations have been fighting for their rights, it’s all about timing and we will win this fight.

Nonetheless, she believes as more voices join in on the issue, it’s a step in making a difference.

As for her role in all this, the recent graduate from Brunel University London with a Master of Science in Business Intelligence and Social Media hopes to inspire women to truly be more than okay with who they are and what they love doing.

There’s so much pressure on women to conform to what society wants them to be and not who they want to be for themselves.
I’m an advocate of staying true to myself despite what people think of me. I always remind myself; As long as God, your parents and you yourself know your intentions and what you’re doing, nothing and no one else matters.
Your niat (intentions) is all that matters. That is something I live by. You do you, girl.

If you’re looking forward to more of Arinna, hang on tight to your seats as she’s been planning out a busy 2020 with her UK agency, BAME Models.

In the meantime, the Malaysian beauty is keeping herself busy freelancing as a social media strategist for a UK sustainable modest fashion brand and interning at an e-commerce modest fashion company.

Have You Seen The New SHEIN X Iman Troye Modest Fashion For Your New Wardrobe?