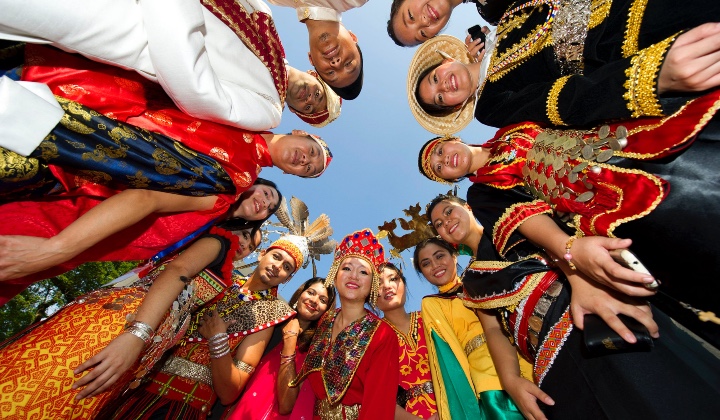 Being half Malay and half Kadazan comes with its own set of challenges and obstacles to overcome. Growing up, I was exposed to a lot of different opinions and traditions which helped guide me to find myself and become confident with the person I am today.

Living in West Malaysia, many people didn’t know what a “Kadazan” or what any other East Malaysian person looked like. Not many know that there was more than just Iban and Kadazan ethnicities in the East.

People would insensitively ask whether I had to take a sampan to reach my grandparent’s house or whether there were still treehouses around in Sabah. Which doesn’t even make sense because East Malaysia is well-known for longhouses!

Once I was asked by a security guard whether I was Iban, I corrected him but he stared blankly back at me and said semua sama je (they’re all the same).

So, here’s a little guide to help differentiate between all the East Malaysian tribes.

The Natives of Sabah

The largest ethnic group in Sabah are the Kadazan-Dusun tribe, the collective name of the Kadazan and Dusun people. The Kadazan-Dusun people were headhunters who collected heads from invading enemies as proof of victory. Removing the victim’s head while alive to preserve its spirit. Performing special ceremonies to appease the head’s spirit so that it would guard their village against disaster.

In Sabah, Kadazan-Dusun is also a language that is taught to school children. Kadazan-Dusun the combination of the Kadazan and Dusun language. The two tribes also share similar momolianism beliefs in the seen and unseen material worlds. To the Kadazan-Dusun it is important to ensure the balance and order between the natural and spirit worlds.

The Bajau is the second-largest ethnic group, originating from Southern Philippines before moving to East Malaysia in the 16th century. Throughout the years the Bajau have remained near the water, earning their nickname as ‘Sea Gypsies’.

After living by the sea for so long, natural selection have made the Bajau genetically strong divers. Researchers have found the Bajau people have larger spleens allowing them to stay underwater for as long as 13 minutes at depths of around 200 feet.

Another major ethnic group in Sabah are the Murut tribe, who were the last of Sabah’s ethnic group to renounce headhunting. To the Murut, heads play a very important role in spiritual beliefs.

Collecting heads were equivalent to the amount of respect you are expected to receive and those who didn’t headhunt were heavily ostracised. The head of an enemy also symbolises that a man is worthy of marriage.

There are more than just these ethnic groups like the Lun Dayeh, Rungus and many more. For more information about their unique traditions and culture, you can read more about it here.

In Sabah, most natives celebrate the Kaamatan Festival or Tadau Kaamatan in May. It is celebrated as a sign of appreciation and gratitude to Bambazon, the rice paddy spirit and to commemorate the spirit of Huminodun the daughter of Kinoingan who sacrificed herself to bring down rain during the dry season to save the villagers from starvation. The festival begins on the 30th of May and ends on the 31st of May.

The Natives of Sarawak

Most of the tribes in Sarawak go by the name Dayak, which is the collective name for the natives there. The Iban are the largest ethnic group in Sarawak. They are also known as the Sea Dayak which was earned when the activities of a small group of Iban pirates on the Bornean coast in the 19th century.

Originating from an upriver tribe in the heart of Kalimantan, they were fearsome warriors known for headhunting and piracy. Traditionally, they worshiped triumvirate of gods under the Singalang Burung, the bird-god of war. The Iban believe that “nothing happens without a cause” and that they are under the watchful eye of the Singalang Burung.

The second-largest ethnic tribe after the Iban are the Bidayuh. The word Bidayuh is a collective name for several indigenous groups of people living in the southern part of Sarawak. The name itself means “people of the land”. They are also known as Land Dayak during the Brooke and Colonial eras.

Due to the different sub-tribes of Bidayuh like the Jagoi, Biatah, Bukar-Sadong, Selakau, and Lara; most Bidayuh have a hard time conversing with one another due to their dialects. Resulting in many of them conversing in English and Malay when they first meet another Bidayuh.

There is also the Penan people, which are an ethnic group of nomadic forest hunters. They have traditionally lived a nomadic life in the forest while the Dayak were more settled. The Penan are also known as Punan, Pennan, Poonan or Poenan. Punan is a general term for Bornean forest dwellers.

Some of the last groups of nomads are found in Gunung Mulu National Park in Sarawak. The Penan people are currently facing a controversy where they are being forced out of their okoo bu’un or sacred land for the construction of hydroelectric dams.

Most of the Dayak celebrate Gawai, a festival celebrated annually on the 1st of June in Sarawak. It is both a religious and social festival. The first official celebration of Gawai was in the year 1965 becoming a symbol of unity, aspiration, and hope for the Dayak community. The celebration starts on the evening of 31 May with a ceremony called Muai Antu Rua, which is a ritual to cast away the spirit of greediness.

East Malaysia has been a part of this country for 56 years now yet we still have to pay extra for Gardenia bread?! Don’t judge us for carrying boxes of twiggies back home when we come to the West.

In all seriousness we are all one Malaysia, it doesn’t hurt to ask more questions about who we are and what our family background is like. Many East Malaysians are more than happy to tell you what life is like on the East side.