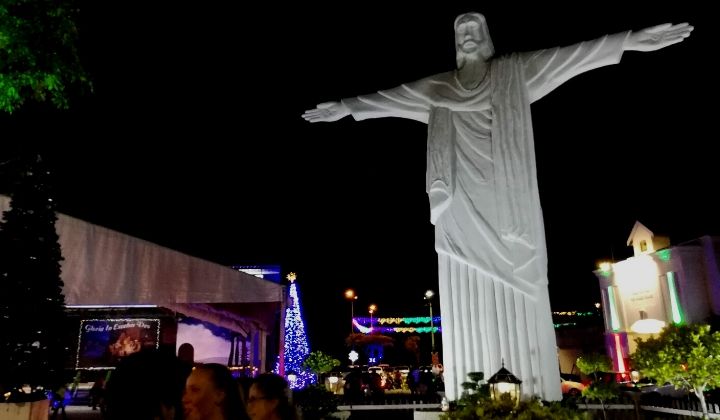 You can tell that Christmas is a big deal at the Portuguese Settlement just from the way the whole village was decorated.

Aside from the tall blue Christmas tree at Portuguese Square, certain houses feature colourful reindeers on their walls; some have beautiful Nativity scenes arranged at their porches; while others seem to be wrapped up in multiple layers of party lights.

The Christmas vibe is strong here.

Christmas is the day that Christians celebrate the birth of Jesus Christ, where festivities involve attending prayers at church, family gatherings, and gift-giving.

Since a majority of the Kristang community are Christians, Christmas is one of the most important days of the year for them. As such, the way they celebrate Christmas is of epic proportions too.

Curious to know more about the legendary Kristang Christmas celebrations, I asked two of my Portuguese friends about it. So here’s a chronology of what goes down from Christmas Eve to Christmas Day for the Kristang families:

10am, Christmas Eve – The preparation

What is an ordinary morning for most Malaysians is actually crunch time for those at Melaka’s Portuguese Settlement.

“Normally Christmas Eve morning is when the cooking all starts, with the cutting and chopping. For the ones not involved in cooking, it’s last minute cleaning for them. Some go shopping for presents, others run errands like buying things that run out,” explained Steve Kyle D’Angelo.

As Christmas Mass (also called Midnight Mass) is one of the most important church services of the year, a high turnout is expected and everyone would be dressed in their best for the occasion. Everyone is usually home by five or six o’clock to get ready for the church service.

Midnight Mass typically includes the singing of Christmas carols, Bible readings, a sermon by the priest, Holy Communion (the consumption of bread and wine in memory of Jesus Christ’s sacrifice for the sins of mankind), and prayers.

Mass ends when the clock strikes midnight and everyone will start wishing each other Merry Christmas. People would then hurry back to their homes to start the party. “I usually head over to my grandmother’s house with immediate family – as she’s the eldest member – for supper and then open presents,” Diandra Nunis said.

D’Angelo also mentioned that the younger generation would take turns to kiss the hands of their elders as a sign of respect.

“There’s a lot of chit-chatting, drinking, dancing, and just sharing stories with the family.” D’Angelo said.

The party will go on all night till six or seven in the morning (because sleep is for the weak).

As all good things must come to an end, the party crowd would start to disperse at around four in the morning and people start cleaning up at five. The rest of Christmas Day is spent on recuperating from all the partying.