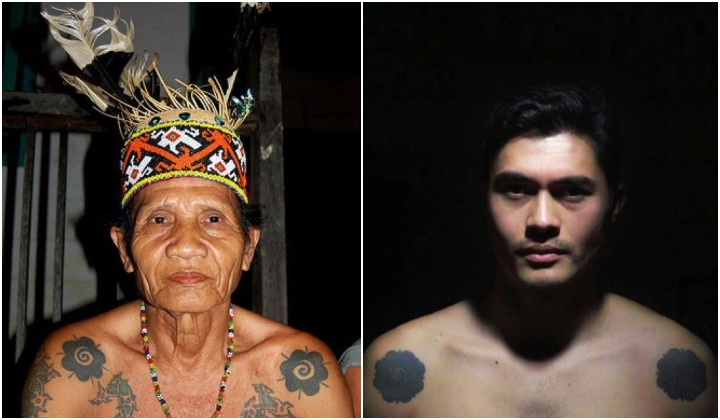 We Malaysians are certainly a diverse bunch. This is especially true for our friends and family in East Malaysia.

In the past, adult members of the Iban tribe were heavily tattooed. To them, these tattoos were not just a form of decoration as each tattoo has a meaning and a story unique to the individual.

In Iban folklore, tattooing came about when a young man named Gendup visited the house of Antung Pantang (tattoo ghosts/spirits) after an adventure in the jungle.

After talking to the spirits, Gendup was approached by the host of the home, Selang Pantang. He was told that he was destined to be the first of his kind to introduce tattooing to the Dayaks (collective term for the tribes in Sarawak).

Iban tattoos are believed to be a form of protection from harm and evil spirits. It is also believed to be a way to tell the Gods that you exist, allowing Gods to see them in the afterlife.

Tattoos are created by artists who consult spirit guides to reveal a design.

Once the design has been determined, artists would proceed to attach up to five bamboo splinters to a ground-up piece of meteorite or shard of animal bone. This tool is known as â€˜kayok tatokâ€™ in Iban.

Then, the artist would proceed to dip the needles in pigment made out of soot or powdered charcoal or any substance thought to ward off evil spirits.

The tattooing begins with the artist tapping the inked â€˜kayok tatokâ€™ into the skin with a mallet.

In the 21st century,  the Iban youth bring a modern spirit to the meaning of â€˜bejalaiâ€™, which is an Iban word that means â€œto walkâ€ or â€œto go on a journeyâ€. This is done by sharing their art with the world and tourists who come to Malaysia.

To the Iban, each design and motif has its own special meaning to the individual.

To truly understand its importance, we turn to Maclean Patrick Sibat â€“ a young Ibanese man who took to Twitter to explain the significant markings worn by his ancestors.

The â€˜bunga terungâ€™, in which the central spiral signifies life. It is inspired by the progression of a tadpole.

To Maclean, his â€˜bunga terungâ€™ is a tribute to his late grandfather, carrying his memories and the collective history of Ibans.

Tattoos can also symbolise mythical creatures from Iban folklore like the Borneo Scorpion.

The Borneo Scorpion is worn by male Dayak warriors who used to cut off their enemiesâ€™ heads. These warriors had the scorpion tattooed for protection in battle.

When tattooed on the throat, the tattoo should protect the bearer from the same fate as of the enemy ie; decapitation.

The â€˜tengulunâ€™ is strictly for those who have taken part in a headhunting expedition and have taken a head off the shoulders of their enemies.

The belief is that the head houses the spirit and when taking a head, one has captured the spirit of the owner.

Fortunately, headhunting is no longer practised within East Malaysian culture. Most East Malaysians nowadays use tattoos as a form of expression and a way to connect to their heritage.

The Iban women too had specific tattoos. These tattoos took the form of â€˜kalaâ€™ (scorpions) and â€˜kemebaiâ€™ (centipede) that are supposed to repel evil spirits.

These tattoos were associated with â€˜pua kumbuâ€™, which are sacred blankets that were considered dangerous as the blood-red dye used was thought to attract spirits that might bring trouble or death to the weaver, the weaverâ€™s family or the entire longhouse.

The Iban called this weaving process â€˜kayau induâ€™, which means the womenâ€™s war.

The process of creating a â€˜pua kumbuâ€™ requires great knowledge and patience as it includes rituals such as sacrificing a pig or a chicken whose blood would appease the spirits.

Each â€˜pua kumbuâ€™ has its own meaning and spiritual energy. Itâ€™s also sometimes thought as an heirloom passed from mother to daughter for generations.

The back piece is usually a mixture of other basic Iban designs that spanned all over an individualâ€™s back.

The key is to achieve a balanced design throughout the back, making it look like one beautiful piece that was made out of several other ones.

Itâ€™s important to note any design on the limbs must be a pair, as it means that the motif is complete.

Their uniqueness has even gained international spotlight, decked on the shoulders of the late Anthony Bourdain and our very own Hollywood sweetheart Henry Golding â€“ who is half Iban himself and went on a journey to discover his tribal roots in order to attain his â€˜bejalaiâ€™.

Such is the importance of Iban tattoos to our Bornean brothers and sisters. They are the personal life stories of each bearer, uniquely representing the knowledge learned, victories and their journeys to growing up.

As Malaysians, itâ€™s important for us to understand each otherâ€™s cultures and way of life. The Malaysian identity extends beyond Malay, Chinese and Indian. Thereâ€™s also the Iban, Bidayuh, Murut, Kadazan, Dusun and Bajau on East Malaysia and even the indigenous Orang Asli of West Malaysia.

1. For an Iban man, the â€˜bunga terungâ€™ was the first tattoo he got as it signifies a coming of age. This motif is only for men. After that it will aid you on your â€˜berjalaiâ€™ or walk. For an Iban to â€˜Berjalaiâ€™ means to travel and gain new knowledge and experiences.