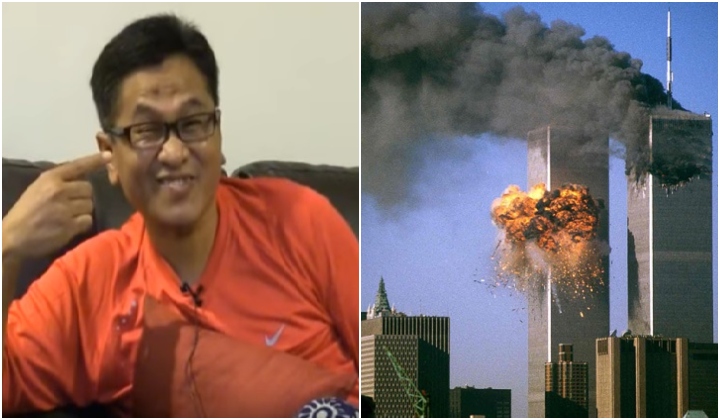 The collapse of the World Trade Centre towers on 11th September 2001 in New York left the world aghast at brazen violence and loss of innocent lives.

Today, we know that the head of the 9/11 attacks is Osama Bin Laden, former leader of the militant Islamist group Al Qaeda.

However, did you know that a Malaysian man is directly linked to the 9/11 terror attack?

Meet Yazid Sufaat, a 55-year-old militant from Johor who was named in The 9/11 Commission Report as â€œMalaysian; member of Jemaah Islamiya.â€

How did he get involved with Al Qaeda?

Through this, he began working with Al Qaeda when the two groups joined forces in 1998 to â€œwage war again Christians and Jews.â€

The operational leader of JI, Riduan Isamuddin (aka Hambali) introduced Yazid to Al Qaeda who needed a scientist to take over its biological weapons programme.

Yazid received a bachelorâ€™s degree in biological sciences, with a minor in chemistry from California State University in 1987. He was also the owner of a pathology laboratory in Malaysia, which gave him both access and knowledge of creating biological weapons.

While the four hijacked planes in the September 11 attack were domestic US flights, Al Qaeda had initially planned to hijack US-flagged commercial planes flying across the Pacific Ocean from East Asia.

The plan to crash hijacked aircrafts into US targets was set in 1999 and possible flights included those departing from Thailand, South Korea, Hong Kong or Malaysia.

With this in mind, four selected suicide operatives were sent to Kuala Lumpur in December 1999 to do case studies on Far East â€“ US flights.

This is when Yazid Sufaat comes in. US intelligence found out that all stayed at his condominium at the outskirts of Kuala Lumpur.

It was here that they plotted and planned for the 9/11
attacks.

Part of their case studies and testing included carrying box cutters hidden in a toiletries kit through airport security and opening it in the flight cabin. Their observations during the Kuala Lumpur deployment helped the group fine tune their plane hijacking plans.

As mentioned before, Yazid was recruited by Al Qaeda for
their biological weapons programme.

When the September 11 attacks took place in 2001, Yazid had already been in Afghanistan for months, attempting to cultivate anthrax for Al Qaeda.

However, he fled to Pakistan in October 2001 when the US unleashed a bombing campaign on Afghanistan.

There was only so far Yazid could run though, and he was
arrested upon his return to Malaysia in December 2001.

After 7 years in detention via the Internal Security Act (ISA), he was freed in 2008 with then home minister Syed Hamid Albar stating that he believed Yazid was â€œno longer a threatâ€ but will be â€œwatched closely.â€

As it turns out, Syed Hamid Albar was wrong because Yazid was arrested AGAIN in 2013.

This time, under the Security Offences (Special Measures) Act for recruiting new members for the Islamic State in Iraq and Syria. (Yes, he was recruiting members for ISIS)

For this crime, he spent four years in Tapah prison.

After two stints in prison, youâ€™d think Yazid would simmer down right?

Barely out of prison, Yazid was arrested in 2017 for recruiting inmates for Al Qaeda while in jail!

The third detention was carried without trial under the Prevention of Terrorism Act (Pota) and he was held in Simpang Renggam Prison.

However, there is a two-year expiry date for this detention and
as of 19th November 2019, Yazid Sufaat is a free man (kinda).

Malaysian police counter-terrorism chief Datuk Ayob Khan Mydin Pitchay told The Straits Times that while Yazid has been released, he is under 2 years of surveillance AND his movements are restricted within Ampang.

â€œIf he wishes to travel outside of Ampang, Yazid would need to alert the Ampang police chief.â€

Has he really changed?

Looking at his history, itâ€™s hard to tell. His involvement with
some of the worldâ€™s biggest terror attacks is not an easy thing to gloss over.

Besides the 9/11 links, the militant was also involved in the December 2000 church bombings in Jakarta and a foiled 2000 bombing plot in Singapore.

But, The Straits Times quotes an intelligence source who states that Yazid appears to have repented based on the input from the Prison Department. Hence, the decision to release him.

Inspector-General of Police Tan Sri Abdul Hamid Bador was also quoted saying that while they understood the publicâ€™s concern on Yazidâ€™s terrorism abilities, it would be unjust to extend his detention based on peopleâ€™s perception.

That does not mean that the authorities are wiping their hands
clean of Yazid, though.

In addition to limited movements, Yazid is also under curfew
between 8pm and 6am and not allowed phone and internet access.

He is also forced to wear an electronic monitoring device (EMD) which would need to be changed from time to time. Any attempts to take off the device would immediately alert the authorities.

Only time will tell if Yazid has truly repented. But for now, weâ€™ll be sleeping with one eye open.