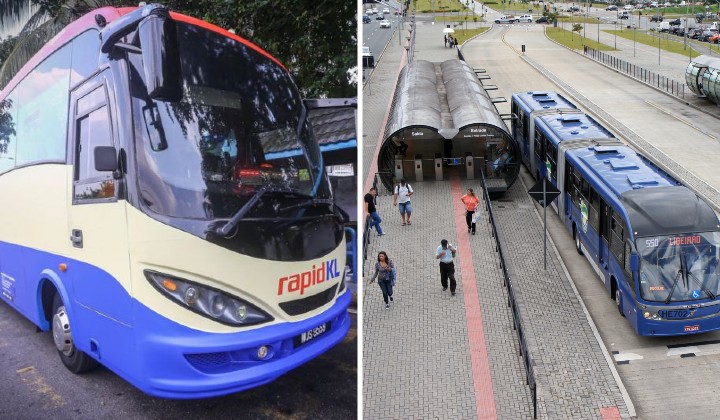 Buses are a ubiquitous mode of transport that is available in almost every part of the world.

The same is true with us here in Malaysia as we have our own bus system.

One of the major players is Prasarana and its Rapid bus system which is available throughout the Klang Valley, Kuantan, and Penang, among other places.

Currently, their ridership is around 400,000 daily.

Its bus services, however, experienced a decline in total ridership by 10 percent to 81 million passengers in a year against the corresponding period which is roughly around 88 million.

One of the complaints given by riders is that the system is too slow which might also be a contributing factor towards the decline.

Although there might be a lot of reasons why the buses are slow, the main factor worldwide is having to compete with personal vehicles on the roads.

Because of this, we have around 87% of Klang Valley denizens who drive alone to work, the highest percentage in the world and not something we can be proud of.

Why not try dedicated bus lanes?

It allows them to skip the traffic, which, as said before, is one of the main contributing factors for them being slow.

The short answer is, yes.

As you can see from the video below, the Los Angeles Metro moves around 70 buses an hour during the evening rush.

This reduces the time for commuters to wait for a ride and also to reach their destinations.

In 17 seconds of traffic, the three buses carried around 210 people while the cars had to go through the massive congestion.

A bird’s eye view of a dedicated bus lane in action. We’re moving nearly 70 buses an hour through the Flower Street bus lane each evening! pic.twitter.com/funsVVdX81

When it was implemented in Seattle, their King County Metro saw an 8 percent increase in bus riders over the past nine years and gained about 700,000 rides between 2016 and 2017 alone.

Over here in Asia, there are places that already have the Bus Rapid Transit (BRT) such as Taiwan which connects 3 cities: Chiayi, Taipei, and Taichung.

The route spans around 107km and the buses transport around 1.3 million passengers per day.

To put that in a Malaysian context, it is roughly around 18% of the total population of Klang Valley which has around 7.2 million people.

Typically, a BRT system includes roadways that are dedicated to buses, and gives priority to buses at intersections when interacting with other traffic.

BRT aims to combine the capacity and speed of a metro with the flexibility, lower cost, and simplicity of a bus system.

It started out in Brazil, and many countries have been implementing it, including Indonesia – in the middle of Jakarta, #doneclaim – and also in Thailand.

Do we even have BRTs?

For now, in Malaysia, there’s the BRT Sunway Line. A fully elevated dedicated busway line that provides a connection between the KTM Komuter and Kelana Jaya Line LRT extension.

It spans around 5.4km and has a total of 6 stations; USJ 7, South Quay, Sunway University, Sunway Medical Centre, Sunway Mentari and Setia Jaya)

Even Johor is upping their BRT game as the state is investing RM2.56 billion and launching it in 2022.

There will be 39 stations along the 51km-long trunk lines and the bus network will cover around 90% of Iskandar Malaysia.

These are great but we need to kick it up a notch to not only make buses more efficient but also help to reduce congestion.

Malaysia had the idea to introduce BRT Federal Line in 2011, but it was shelved for some reason.

It was supposed to span across 34km with 25 stations and provide easy connectivity to LRT, MRT, and KTM commuter rail lines, with all stops linked to other bus services.

Although it might be a difficult thing to do as it requires the collaboration of various stakeholders, the end result could be rewarding not only for riders but also the service providers themselves.

Whoops, A Merdeka Parade Tank Broke Down Along Jalan Damansara