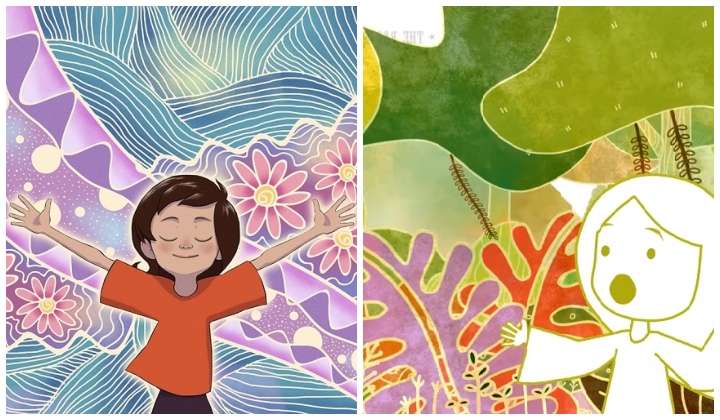 Malaysian
animation has been on a roll recently, hasnâ€™t it?

Weâ€™ve celebrated how Upin & Ipin is making a bid for Oscar 2020 while Boboiboyâ€™s director previously highlighted that Malaysian animation is as competitive as Hollywoodâ€™s.

â€œIf you have a great story that you want to tell the world, festivals are the easiest and cheapest way to do it. Youâ€™re also putting your work alongside some of the best in the world so you will automatically up your own game and try to push the boundaries of the art form.â€

As it turns out, Irwan and The R&D Studio (yes, the same studio that produced the series â€œWizards of Warna Walkâ€ on Disney Channel Asia) were onto something.

â€œItâ€™s a whimsical, truly beautiful film that celebrates through the glorious forms and colours of animation, a life transforming nature of the creative imagination. I think actually the film is a profound meditation on the very idea of animation”

Irwan told us that conceptualising the batik world sequence no easy task because they didnâ€™t have anything to latch on to as a starting point.

â€œWe had to try and make a 2D batik artwork into a 3D world.â€

So they dove into the world of batik, diligently studying the art to successfully translate batik painting techniques to animation. â€œWe discovered so many other cool stuff about batik in our research which we tried to put into the design of our batik world,â€ Irwan says. Such as:

3. Multi spouted cantings â€“ The pen-like tool to apply wax that can draw multiple wavy lines and seen as waves in the ocean.

The brainchild of writer Heidi Shamsuddin and Irwan, the seed of Batik Girl was actually planted at a childrenâ€™s book fair in Italy!

They noticed an elderly couple intently analysing the batik tablecloth of the Malaysian display despite being surrounded by hundreds of beautiful childrenâ€™s books.

â€œIn our overactive imagination we thought that they must have surely seen something in the tablecloth, a creature that is moving inside the batik patterns and that was the reason why they wanted to purchase it!â€