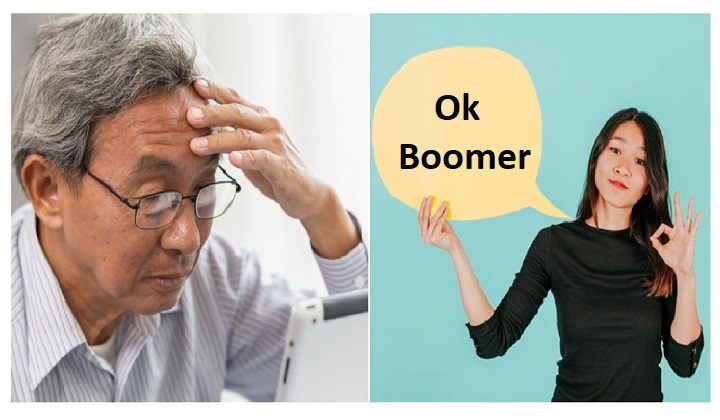 Have you been seeing this word popping up again and again on social media? Overheard the phrase wafting from a gaggle of teens laughing at their phones at the mall? Or even seen Syed Saddiqâ€™s latest tweet?

I cannot change my past, but i can change my future.

I owned up to it. Saya mengaku dan tidak mahu menipu.

Jom bincang isu dasar, isu negara. Focus should be on the rakyat. https://t.co/O7MVYRUZO6

Yes, a new vernacular has entered the chat.

But what is it?

â€œOk Boomerâ€ is a meme, but also essentially a retaliation by the youth (typically millennials and Gen Z) to the previous generations for berrating them for being pampered, sensitive or unappreciative.

As the top definition on Urban Dictionary effectively explains:

The â€œBoomerâ€ in â€œOk Boomerâ€ refers to baby boomers, or the Baby Boom generation of people born between 1946 and 1964 typically associated with the post World War 2 growth in America.

However, itâ€™s not restricted to this generation nor Americans specifically as the phrase is used to dismiss out of touch or close-minded opinions associated with older people in general.

Just like their global counterparts, Malaysian youth are
climbing an uphill battle with stagnant wages, increasing cost of living and
the lack of employment opportunities.

A Khazanah Research Institude (KRI) study found that Malaysiaâ€™s youth unemployment rate is rising with 10.92% in 2018 â€“ three times higher than the national average of 3.3%. Another study by the institute also debunked the â€œYoung Malaysians are lazy and too pickyâ€ myth.

News of Malaysian engineersâ€™ salaries being stagnant for the last 20 years have dominated headlines in October.

Meanwhile New Straits Times reported that Bank Negara Malaysiaâ€™s 2018 Annual Report found that Malaysian workers are still being paid less than workers in benchmark economies, even after adjusting for productivity levels across nations.

With all this information at hand, Malaysian youth who voice
out their dissatisfaction on the issues above are still being told that its
inherently their fault.

And so, Malaysian youth are choosing to fight back with two simple words: â€œOk Boomer.â€

Are â€œBoomersâ€ really to blame though?

While meant to be a sarcastic and funny meme, the â€œOk Boomerâ€ phrase does have ageist connotations and it can be dismissive.

The truth is, Boomers are not at fault for youth struggles.

The fundamental issues of the rising cost of living affects both the young and the old.

The previously mentioned issue of wage stagnation and cost of living issues stem from the decisions and policies made in high office and corporate boardrooms.

In fact, another KRI study cited in The Star also noted that the income gap between the rich, middle class and poor in Malaysia has widened since 2008, almost double compared to 20 years ago.

Principal fellow at the Graduate School of Business, Universiti Kebangsaan Malaysia, Datuk Dr John Antony Xavier explains in New Straits Times that wealth inequality is a strain on economic growth and a source of social instability.

He also points to the book Why Institutions Fail that put across evidence from rich and poor nations to conclude that social inequality is affected greatly by institutional factors.

The good news is that the Malaysian government is already making moves to address this income inequality. A 30% income tax rate on those making RM2 million and more annually has been proposed in Budget 2020.

However, thereâ€™s still some ways to go for Malaysia to bridge the wealth gap as our Gini coefficient hovers around the World Bankâ€™s 0.4 benchmark, although the numbers have been improving over the decades.

We have yet to introduce a wealth inheritance tax while our minimum wage is at RM1,200 (for urban centres) – which is significantly lower than the RM2,700 living wage estimation by Bank Negara Malaysia for a single adult in Klang Valley.

Now that there’s a better understanding of what caused the rise of the “Ok Boomer” phenomenon, it’s best that Malaysians cease fighting about their age differences to address the real issues.