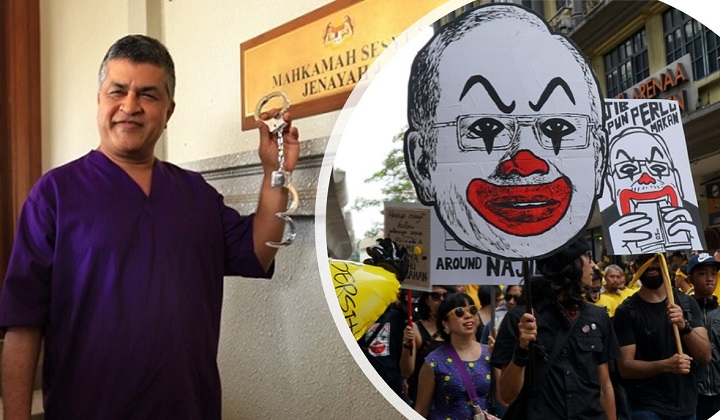 Article 10 of the Malaysian Federal Constitution states that every citizen has the right to freedom of speech and expression.

But is that the reality though? For decades, we have been inundated with news of arrests, bans and censorship of people, film, books, arts and more.

Zunar, the famed political cartoonist has been hit with a record of NINE charges under the Sedition Act.

Fahmi Reza, the mastermind behind the Najib clown face was convicted under Section 233 of the Communications and Multimedia Act 1998 for uploading the image on his social media – a decision that was finally dropped after numerous appeals.

The truth is that censorship is a harsh reality of Malaysian artists.

This was the underlying message by some of Malaysia’s most eminent names in the arts at the “Arts for Politics or Pleasure: Malaysian Censorship and Regulation” forum organised by Taylor’s University School of Liberal Arts & Sciences in October 2019.

Censorship has been a big part of my life.

Malaysia’s First Lady of Theatre, Dato Faridah Merican is no newcomer to the world of censorship. A thespian since 1972 along with 46 years in advertising, she’s had more than her fair share of reprimand from authorities.

For one, KLPAC’s 1993 production of A Streetcar Named Desire drew flak and the lead actress Ramona Rahman was banned from the stage for 2 years for a scene where she locked lips with her male co-star.

At the same event Zunar shared besides the Sedition Act, he’s been silenced under SIX laws.

Some of the Malaysian laws commonly associated with censorship are:

The 2019 World Report by Human Rights Watch documents that Malaysia’s freedom of speech improved dramatically following the May 2018 elections since Pakatan Harapan (PH) came into governance.

However, the report contends that the use of the Sedition Act still continues despite the promise of repealing the colonial era law in PH’s election manifesto.

In fact, new sedition investigations were opened in 2019, especially against individuals accused of insulting Malaysia’s royalty.

There is progress, though. Earlier in October 2019, Dewan Rakyat has scrapped the Anti-Fake News Act 2018 that makes “fake news”, especially those shared online, a crime.

So, how does one go about expressing your artistry in light of these censorships?

Lawyer Khaizan Sharizad Razak Dali (Sherrie) advices that creatives need to know how to argue and justify when the need arises.

Freedom is not absolute, nothing is absolute.

Dato Faridah agrees with this sentiment as well as she’s spent many years gleefully fighting and defending her work.

I just think of it as one more test for me as a Malaysian. Censorship is so challenging. It’s exciting and thrilling when I get to “outsmart” the authorities.

While having knowledge of the law is important, Zunar cautions artists against self-censorship.

When you create, don’t think of the law. Just follow your spirit and let your work speak for itself. Knowledge of the law is important, yes, but never let that stifle your voice. Because talent isn’t a gift, it’s a responsibility.

As the Index on Censorship watch group puts it, the freedom of expression is a fundamental human right.

The Malaysian artists that opt to touch on sensitive or political issues simply underpin the importance of this right in the development of society and a mark of a healthy democracy.