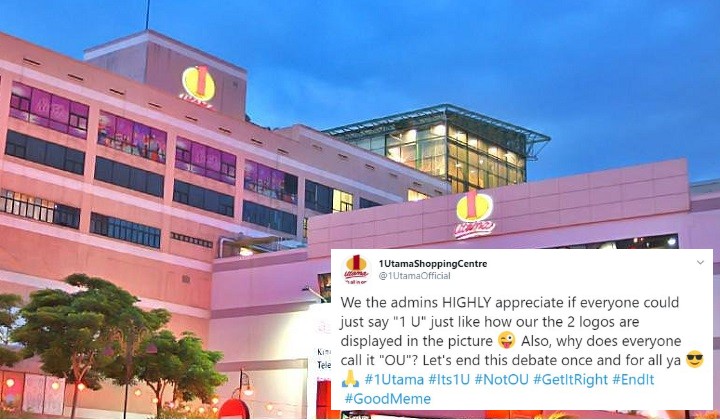 The great 1U vs OU debate has been one of the longest running debates for Klang Valley residents.

Many go to great lengths to defend and justify their
preferred acronym for the famous 1 Utama Shopping Centre at Bandar Utama.

Well, now it looks like the arguments can be put to rest because the admins of Malaysiaâ€™s biggest shopping mall announced on Twitter that the proper acronym isâ€¦ 1U!

We the admins HIGHLY appreciate if everyone could just say "1 U" just like how our the 2 logos are displayed in the picture 😜 Also, why does everyone call it "OU"? Let's end this debate once and for all ya 😎🙏 #1Utama #Its1U #NotOU #GetItRight #EndIt #GoodMeme https://t.co/o4It9c0752

As one can expect, the revelation blew the minds of Twitterjaya
as Malaysians spent a good portion of the day discussing it.

However, Malaysians being, well, Malaysians, stuck to their guns and Team OU continued asserting their superiority over Team 1U.

This raging discussion prompted us to ask, â€œHow did 1 Utama shopping mall get its name in the first place?â€ So we scoured the depths of the internet to present you our findings.

A little bit of history

To go into the history of the land where the shopping centre
sits on, Bandar Utama Damansara was originally an â€œuluâ€ place that consisted of
palm oil plantations.

Then, See Hoy Chan Holdings Group came in the 1990s and started developing the area into a township with residential, recreational and commercial appeal. (Judging from the areaâ€™s infamous traffic jams, the plan clearly worked.)

1 Utama Shopping Centre opened its doors in 1995 to much fanfare with Jaya Jusco (now AEON) drawing in Klang Valley-ites of all ages. To this day, it remains as the after-school lepak spot and the “mum-needs-to-buy-a-new-something-for-the-house” spot.

In an interview with The Edge Markets, Tan Sri Teo Chiang Kok of Bandar Utama City Centre Sdn Bhd said that the plan for developing a mall started around 1993 with the developers looking into the design of US malls for inspiration.

We tried scouring the developerâ€™s websites, news sources and
even messaged the mall for any mention of the 1 Utama origin but failed to get
an answer.

It could just be that the developers were inspired by the â€œUtamaâ€
(meaning first) in Bandar Utama and adopted the â€œ1â€ concept in the name, as
seen in the First Avenue building as well.

1U vs OU debate begins

The mall officially opened as 1 Utama Shopping Centre but
people apparently found it quite the mouthful and so abbreviations popped up.

The running theory is that Petaling Jaya people call it OU while
Kuala Lumpur â€œvisitorsâ€ call it 1U.

However, there is no fixed theory as the 1U vs OU hypothesis also claims preference according to oneâ€™s age or even race.

There is no establishing timeline of the 1U vs OU name as both teams claim to remember their preferred acronym being used since Day 1.

But with 1U officially announced as the right acronym, weâ€™d also like to clarify the old wing/new wing confusion.

Well, now you (sort of) know the origin story of 1 Utama
Shopping Centre and the power of its name.