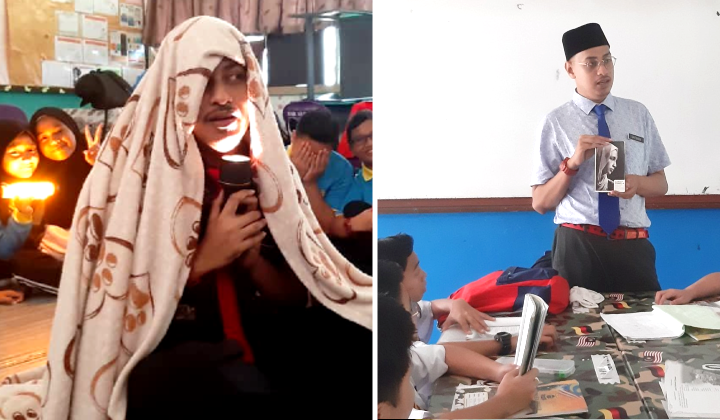 Mental illness is kinda weird, and by weird we mean how society chooses to perceive and discuss it.

Most people think that they get what mental health is and how someone whoâ€™s struggling with mental illness is going through.

The woke bunch would go on and on about how â€ itâ€™s okay to be anxious or depressedâ€ and how â€œsuicide is a cowardâ€™s way outâ€ and icing it up with the â€œwe know what youâ€™re going throughâ€ and the â€œweâ€™ll always be there for youâ€ talk.

But the sad truth is that people who go through life with mental illnesses and chose to speak about it are often met with stigma and a whole lot of false empathy that has actual real-life consequences.

In a thread posted on Twitter, Safwan Jebat writes about the challenges he had to go through as a person struggling with mental illness and living in an indifferent society.

Working as a substitute teacher at the time, the TESL (Teaching English as a Second Language) graduate became an overnight star for his uniquely imaginative teaching style and how his short time being with his students had saved him from depression.

Safwan was also featured in an episode of TV3â€™s Malaysia Hari Ini, sharing his story and what inspires him to become an educator.

But, since going public about his condition and taking a strong stance as an advocate of mental illness, Safwanâ€™s life has been turned upside down.

He says that ever since word got out of what he was going through, it been even more difficult for him to secure a job.

Speaking to TRP, Safwan says that since his teaching contract ended, he has gone 2 months without work and is struggling to make an income.

Safwan who is currently freelancing as a tutor has 1 student under his care, but due to his condition, he said that some parents were reluctant to have him teaching their kids. And with the school semester coming to an end, things are not really looking up.

Even more disheartening is the fact that Safwan has received many hurtful messages and attacks on social media, as well as being ignored and rejected by the people around him.

Safwan confessed that recently he even came close to the edge and tried to take his own life, but has since been seeking professional help and going through therapy to cope with his condition.

Though going through turbulent times, Safwan does not regret the path that he has chosen and will continue to remain vocal in championing the mental health cause.

Safwan would also not back down from realising his dreams to become a teacher, even if the doors might be closed to him here in Malaysia.

I love teaching so much. Teaching saved me from depression and suicidal thoughts. I donâ€™t want to die with (this) gift that God has given me, which is teaching. I would love to contribute, no matter where, Thailand, Indonesia, Koreaâ€¦

Safwanâ€™s story reveals that our society still has a long way to go in the fight for mental health awareness, even with the efforts by the government to create a more informed community who are attentive towards the issue.

You can read his full thread here;