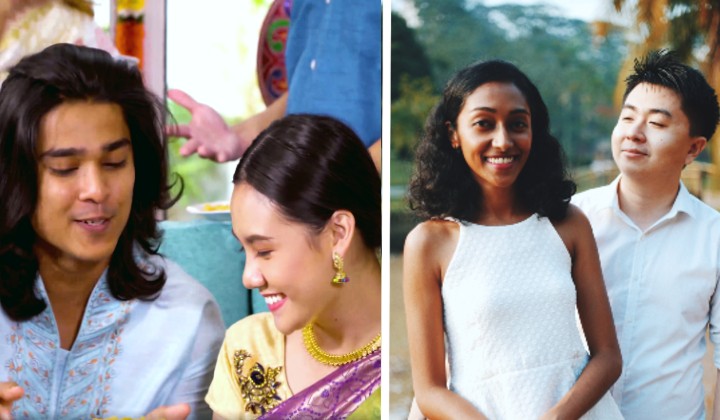 I came across a Deepavali video that portrays a happy Indian-Chinese would be couple celebrating their first Deepavali together and this made me question: are mixed race marriages easier in today’s modern world or will some things never change?

Being in an interracial marriage myself, I understand that mixed race marriages have their ups and downs.

Mixed marriages have their own set of challenges, different cultures, different beliefs and even sometimes different religions. This naturally is a melting pot for filial and societal tension.

But has times changed? Perhaps the country has moved forward and become more accepting? Are Malaysians now –gasp– woke?

We reached out to a few interracial couples to see if things truly changed for the better as time passed.

Martin and Julianna are celebrating their 38th anniversary this year, as a Catholic Indian and Chinese. They tied the knot in 1981, and have never looked back since.

Julianna admits that in the beginning, things were difficult. Even though Martin was already very comfortable with the Chinese culture and speaks Cantonese to his friends, Julianna’s family had reservations on whether the pair would be a good match.

We were young and in love. We made up our minds and nothing really could change that.

Julianna, in between laughs.

Fortunately, the families mellowed after marriage when they saw how the couple stayed firmly in love. In fact, her mother and mother-in-law very quickly became good friends.

Julianna joined his Catholic family pretty easily as well, saying that it’s the best of both worlds as they can celebrate both Christmas and Chinese New Year together without conflict.

She finds that her Chindian (Chinese + Indian) children used to experience some confusion when they were kids, as her daughter once wrote her race as “English” just because she spoke English at home! Her sons were also easily mistaken for Malay were often pulled out of Moral class to attend Agama class instead.

However, she and her family takes it in stride and are able to laugh about it. Now, all her children are fluent in multiple languages including Hokkien and Cantonese.

Ali and Siti (not their real names) have been married for almost 30 years, settled comfortably into a life together. Ali is Malay, and Siti is a reverted Chinese.

At first, Siti was rather bewildered by the many Malay customs. She found it difficult to live up to expectations from the Malay community who expected her to just know their customs and traditions.

Being a Muslim is easier because I can be a Chinese Muslim.

Siti, on adapting to a Malay culture.

However, she managed to pick up the language, culture, and habits after observing and learning during family gatherings.

Ali picked up some Cantonese phrases around Siti’s extended family as well, though they speak English when Ali comes around.

Ali and Siti’s family grew to be less traditional and more “Westernized”, conversing in English most of the time and not being too strict on old traditions.

Surprisingly, they didn’t have any conflicts in raising their children together. Since they moved away from a traditional upbringing, their children never had to feel caught between two cultures.

Sidney and Samini tied the knot just a month ago, both excited to push into their 30s with each other. Sidney is Buddhist Chinese and Samini is Hindu Indian.

Sidney admits that the hardest part of their relationship was the beginning, when they were anxious about what other people thought of them. People would stare and give dirty looks.

Initially, Sidney’s family was also resistant to him dating an Indian girl. He was warned by relatives to “not disappoint the family” and that it would upset his late grandmother.

Funnily enough, Sidney notes that his mother loved watching Indian serial dramas on Zee TV, which is why she was rather fond of Samini.

Ultimately, he used a traditional Chinese moon block (a divination tool for yes/no questions) to ask his grandmother’s permission to bring Samini home for Chinese New Year, despite his family saying no.

In a dramatic fashion, the moon blocks showed one open, one closed, which meant “YES”. The rest is history. His family then learned to accept them together.

I think we were one of the lucky ones to get away with far less drama and tension as some of the stories I had heard over the years.

Sidney, on the hardships they faced during their relationship.

Now, Sidney and Samini are well-exposed to each other’s culture and the conflicts have dissipated with time.

Which is why it’s actually a good thing that Sunway’s Deepavali showcases a warm, welcoming interracial relationship in which no-one bats an eye- because it shouldn’t be something scandalous.

With time, all relationships mellow out and the conflicts that seemed to have been immense turn into distant memory. All that remains is love.