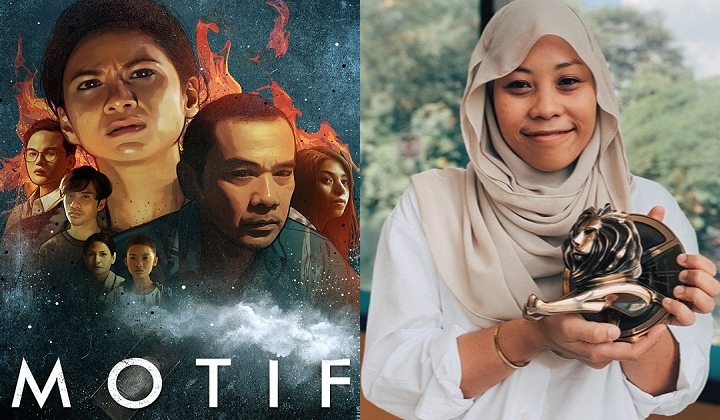 For the longest time, going to Malaysian cinemas would mean
watching another Hollywood blockbuster or foreign films. Local films barely
made a blip on our radars.

The winds of change are blowing, though, as weâ€™ve seen a rise in brilliantly made Malaysian films on the big screen. From Jagat to Ola Bola as well as the latest Upin & Ipin movie winning at an international film festival in Canada, the local filmmaking industry is finally shining under the spotlight.

About Time GIF from Growinguphiphop GIFs

The latest addition to this line-up of excellent Malaysian films is Motif, a murder-mystery that explores the nuances of polygamy. Produced by WayangWorks and Ore Struck Media, it’s directed by a Malaysian Cannes award winning director.

TRP had the pleasure of catching this amazing film right
before it hits theatres nationwide on 26th September.

Nadiah Hamzah, the brilliant director, was recently awarded
the bronze medal at the Cannes Gold Lion 2019 Award for a short yet powerful
anti-bullying PSA.

She was also called â€œone to watchâ€ by The Hollywood Reporter,
a wildly popular US Entertainment magazine.

With such accolade to her name, itâ€™s no wonder that her debut film, Motif, on the tale of a missing teenage girl in a small town and the frustrations of the investigating officer played by Sharifah Armani.

2. The murder-mystery storyline will leave you in awe

No joke, throughout the 86-minute movie, this writer was
glued to her seat despite the protests of a very full bladder.

To summarise the tale, Inspector Dewi (Sharifah Armani), a
talented policewoman from Bukit Aman is sent to the sleepy town of Tanah Merah
to investigate the case of a missing teenager named Anna (Khayrani Kemal).

However, she finds a less than warm welcome as the town views
the outsider with distrust, especially from her assigned partner Inspector
Rizal (Taqim Zaki) and the missing girlâ€™s father Hussein (Datuk Rosyam Nor) who
is also a powerful figure in the town.

As Inspector Dewi dives further into the case, she starts getting
anonymous threats and her personal life seems to unravel concurrently with the investigations.

Whatâ€™s interesting is how Nadiah dares to prod the extremely
touchy case of polygamy with thoughtful care, diving deep into the emotional
psyche of the parties involved.

For every minute of the movie, right until the end, the audience is kept guessing in this whodunit. Even when it cuts to black at the end, youâ€™ll be left in your seat with your mind whirring.

With stellar names such as Sharifah Armani and Datuk Rosyam
Nor leading the movie, there is no doubt that the acting is up to mark.

In the film, the tension between the two is palpable and Rosyam
Noorâ€™s evil eye is scary even through the screen.

Special shotout to Taqim Zakiâ€™s as the local investigating
officer who provides unexpected moments of laughter through his earnest delivery.

Of course, the rest of the cast with Iedil Dzuhrie Alaudin, Emma
Tosh, Sherie Merlis and many more are simply superb at drawing the audience
deeper into the darkness of the film.

We have to admit, this is a BEAUTIFULLY shot film. The
scenery is BREATHTAKING with some of the finest views of Kuala Lumpur, Sungai
Penchala, Nilai dan Bukit Fraser, Pahang.

Itâ€™s dark and powerful as Nadiah was inspired by Scandinavian murder TV series, so the shots are majestic. Fans of Black Mirror may find the visual cues similar to the Crocodile episode that was shot in Iceland.

Thatâ€™s all the â€œMotifâ€ you need to watch Motif, releasing nationwide on 26th September!