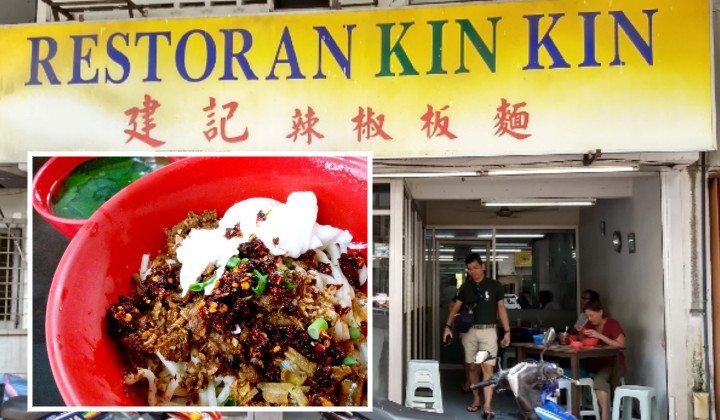 We know that our delicious cuisine is influenced and shared heavily between our neighbours… and quite often we may disagree about where our beloved dishes were invented.

However, KL has dibs on the invention of chili pan mee, traceable back to a tiny stall that used to be under a big tree in Chow Kit.

While traditional pan mee is usually served in soup with hand-pulled dough bits or in thick wide strips, the noodles for chili pan mee takes on the thickness of spaghetti.

The inventor, Tan Kok Hong, introduced his specialty chili pan mee in 1985, after lots of experimentation.

He says that he noticed many of his customers adding chili into their noodles, which prompted him to create the spicy dish. The egg was added later on to lend to the smoothness of the noodles.

The noodles are made fresh so they are always springy, topped with a perfect runny egg, crispy anchovies, and minced pork.

The dry chili spice packs a flavourful punch, so always mix it in your noodles in small doses to get that perfect balance of spicy and salty.

The restaurant is the only place you can get the special dry chili spice, as Tan does not sell the chili separately and protects the recipe guardedly. He says that others have tried to steal his chili recipe to replicate it, but nothing comes close to the original.

If you love chili pan mee, or just spicy noodles in general, you definitely can’t miss out Kin Kin Chili Pan Mee. No other chili pan mee quite compares!