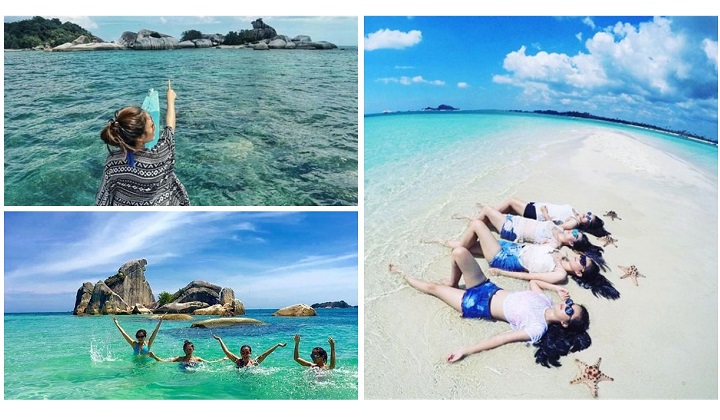 Hello overworked Malaysians, we KNOW you need a break from the never-ending tasks at work.

A place where your bank account won’t accuse you of committing financial murder!

The place you’re looking for is Belitung Island, Indonesia!

Yes, this magical place that you seek is a quiet island perched in the middle of the Java Sea, untouched by the worries of an urban society.

Here’ss some examples of of Belitung’s beauty that’s waaaaaay nicer looking than your boss’ face.

Who would’ve known that this cerulean-cyan blue scene was created by accident?

Yep, this gorgeous lake is actually the product of kaolin clay mining.

However, the site was abandoned by miners and filled up with turquoise waters that made for an irresistible picturesque scene.

Perched on the tiny island of Pulau Lengkuas is a towering lighthouse that’s 130 years old!

A rich source of tin, clay, iron ore and silica sands, Belitung naturally caught the attention of colonisers, amongst whom were the Dutch who erected this lighthouse in 1882.

While climbing up the 12-storeys might feel like a daunting workout, it’s all worth it when you see the STUNNING views from above!

(Ps: can you see just how clear the water is?)

With beaches peppered with granite rocks and and a virtually unobstructed view to the Java sea, you’ll catch some of the best sunsets of your life!

From Pantai Tanjung Tinggi to Pulau Lengkuas, it’s nothing but the best #GoldenHour.

Okay, have we mentioned how incredibly blue the waters of Belitung are?

For real, Belitung has some of the best beaches in Indonesia with soft white sand and granite rocks that’s completed with crystal clear waters.

Besides staring in wonder and taking pictures, you can dive right in!

This colourful wonderland was built to honour Andrea Hirata, a local boy who brought the island into the national spotlight with his book Laskar Pelangi or The Rainbow Troop.

Opened in 2012, the Museum Kata Andrea Hirata is actually the only Museum on Literature in Indonesia.

It’s built as a replica of the elementary school in the story, which is why it’s so whimsical and fun!

Save the Turtles at Pulau Kepayang

Yes, we know that being on vacation is usually all fun and games.

But how can you resist these adorable baby turtles at the Kepayang Island Conservation Centre?

Besides freeing baby turtles into the sea once they’re strong enough, you can also help in their coral conservation project and plant a coral in the sea.

So, Belitung is actually surrounded by more than 100 small islands!

Seriously, there’s so many that you can choose from on your island hopping for swimming, sunbathing and taking pictures.

However, you should totally check out the disappearing island of Pulau Pasir.

Technically, it’s not an island, but a stretch of sand that only appears during the low tide.

In fact, it’s so small that you get a 360 degrees view of the surrounding sea – which is really cantik lah!

Plus you get to see plenty of starfishes that are washed up ashore.

Remember when we mentioned that Belitung was once a mining hub?

Another remnant of that is Open Pit Kelapa Kampit, an abandoned tin mine with towering red cliffs surrounding an emerald pool.

There’s also abandoned caves that you can explore, but we urge you to proceed with caution ya!

The best part is that IT’S SO EASY TO REACH!
Just a quick 1.5 hour flight away from KL thanks to a new route by AirAsia.

AirAsia Members can ditch your office chair for a beach chair with an all-in, one-way fare of just RM79 from Kuala Lumpur to Belitung!

(But please don’t tell your boss, otherwise they’ll also want to follow you.)