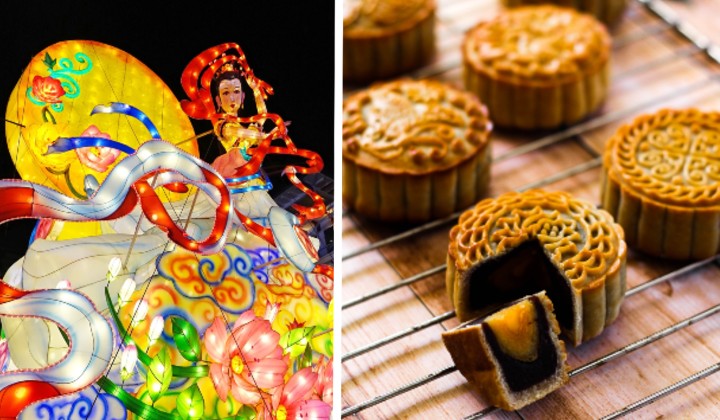 The Mid-Autumn Festival (aka the Mooncake festival) is upon us, which means lots of mooncakes to eat and lanterns to play with!

But the Mid-Autumn Festival, long steeped in history, has lots of fun facts you probably didn’t know…

According to legend, the government in the late Yuan Dynasty in China was cruel and oppressive. Zhu Yuanzhang, a rebel leader, wanted to launch an uprising, but soldiers would intercept all his messengers.

So Zhu Yuanzhang had the women in his village bake mooncakes with notes containing the date of the revolt in them, to be spread to the other rebels under the noses of the soldiers.

The rebellion was successful and the capital was taken over. That’s how the Ming Dynasty began.

2. Sarawak has an exclusive layer mooncake

The layer cake, Sarawak’s specialty pastry, has been made into mooncakes to celebrate the Mid-Autumn festival.

A Sarawakian baker was the first to merge the two popular treats. She also serves offers her mooncake in the traditional crust or the snowskin crust.

The full moon in Autumn, also known as the Harvest Moon, is widely celebrated across the world as it is closely associated to a good harvest.

In Britain, the Harvest festival is traditionally held on the Sunday near the Harvest Moon and includes going to church.

In Iran, the Harvest festival is extravagant as taxes were collected and gifts were brought for the king.

4. The rabbit on the moon was sent there as a reward

Have you ever wondered why there’s a “rabbit” on the moon?

Another legend states that 3 deities visited the earth as 3 poor, old people, begging for food.

A rabbit, who didn’t have any food, offered itself to the 3 deities and threw itself into their fire. The deities were so moved that they sent it to the moon as an immortal jade rabbit.

5. Carrying lanterns for the Mid-Autumn Festival is not a Chinese tradition

Lanterns are not part of the traditional Chinese celebration of the Mid-Autumn Festival. Instead, this tradition is only practiced in Cantonese communities, Vietnam, and Malaysia.

Historically, the Baiyue people were in close contact with the Han (“Chinese”) people of Guangdong, Guangxi, and Vietnam. The tradition was shared in this area.

Later on, these Baiyue-Hans migrated to Malaysia as well, bringing their traditional lanterns with them.

6. Crabs were used to determine fortune

An old forgotten custom for the Mid-Autumn Festival included putting candles on the back of crabs and letting them loose in the yard.

If the crabs stayed within the compound, it meant that fortune would “stay” with the family. Young children would drive escaping crabs back into the yard to avoid fortune from “escaping”.

Lantern riddles are riddles, poems, or folklore written on a strip of paper and hung beneath lanterns during the Mid-Autumn Festival.

However, in ancient times, advisers to emperors would use the riddles to subtly suggest advice that the emperor may not like.

If a suggestion was taken negatively, the advisers would quickly interpret the riddles another way.

What Kind Of Tea Goes Best With Mooncake?