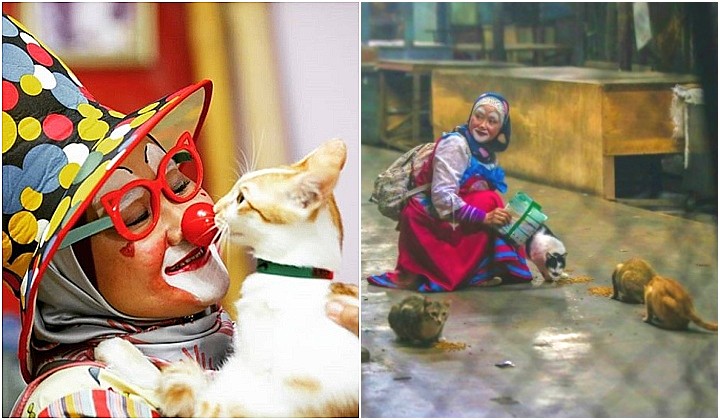 But Nazirah Abd Rahman proves to us that clowns are not all
that scary. In fact, theyâ€™re harbingers of joy and hope. Well, this one anyway.

She dresses up as a clown on weekends to feed stray animals and pay for their medical bills!

The 42-year-old Ipohanâ€™s alter ego is called â€œMama Pinkyâ€- a
jolly jester who performs and sells brightly coloured balloons of all sizes at
a local cafÃ© in Taman Jubilee.

Why does she spend her weekends clowning around for strays?

The answer is simple- pure empathy.

â€œI really feel sympathy for them. Unlike humans, they canâ€™t tell whether they are hungry or in pain.â€

Her tender heart cannot stand the sight of an animal in pain, so she does whatever she can to help the voiceless creatures.

â€œWhenever I find stray cats or dogs, I will feed them and if they are wounded, I will bring them to the veterinarian.â€

Nazirah tells Malay Mail that she has been on this â€œrescue
missionâ€ for over four years with around 50 cats in her home!

Before she became Mama Pinky, there wasnâ€™t much she could do
for the hapless strays. Once the face paint came on however, she could care for
more creatures AND give them proper medical care.

Nazirah and her three kids have cared for those with broken limbs, festering wounds and even creatures that have died!

â€œWhenever they find any injured animals, they will bring back home so that they can be treated. Even if the animals are dead, they bring them back home and bury them.â€
â€œHowever, if they found any injured or dead dogs on the road, they will help bring them to the veterinarian or bury them somewhere near.â€

Itâ€™s so wholesome right? But this isnâ€™t easy for Nazirah to do though.

She estimates that it takes about RM400 a week to care for her cats and strays.

While the amount may not seem too bad to some of us fortunate
ones, itâ€™s a sizeable amount for the kind soul who works as a beauty consultant
at a shopping complex in Ipoh.

After work, she rides about 20kms home to Batu Gajah, quickly slaps on the face paint and silly costume before riding back into Ipoh to perform at Konda Kondi Cafe & Bistro.

She entertains patrons for two hours every weekend night until 11pm.

Then, she hops on her trusty motorcycle and goes for a spin
around the streets of Ipoh to feed the strays. Her nights usually end around
1am.

Weâ€™re truly inspired by Nazirahâ€™s story and we hope that it
inspires you too!