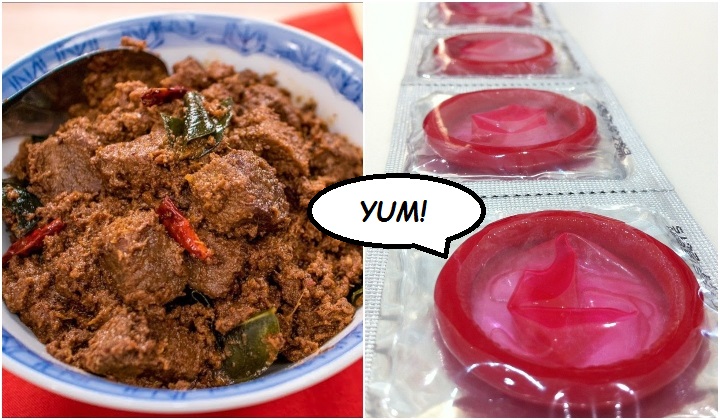 Have you ever wondered why our favourite meals are invading the bedroom meals?

Why your life got extra sam-ball, you’re more teh tarik to your partner or why y’all are t-hornier?

Why are we seeing Rendang, Nasi Lemak, Teh Tarik & Durian condoms EVERYWHERE?

Well, it’s because the world’s largest condom manufacturer is a Malaysian company!

Yep, the creator of these tasty love gloves is Karex Berhad, a company that has been holding on to the pleasure crown since 2011 when it sold 3 billion condoms!

Forbes reported that Karex’s factories in Malaysia and Thailand have produced 5 billion condoms (~15% of global market) in 2016 that were exported to 120 countries.

One in every five or six condoms is a product manufactured by our company, so I always say we’ve touched a vast number of people in the most intimate way you can imagine!

Not only that, Karex also makes condoms for DUREX.

But they don’t solely make condoms. According to their website, Karex makes personal lubricants, medical probe covers as well as urethral balloon catheters.

Wow, so Malaysian rubber is super kaw. But why local food flavours?

Well, the REAL reason is to promote safe sex.

Malay Mail reports that Karex’s idea behind the local flavours is to break stigma and get people comfortable enough to talk about sex in an educational way. Albeit with a few laughs!

To the CEO of Karex, Goh Miah Kiat, its not just a marketing gimmick, but also a clever way to get food-obsessed Malaysians to get comfortable about sex and contraception.

I wanted something that encouraged Malaysians to talk and, of course, to encourage the use of contraceptives. And nothing unites us like food. I also wanted something we all have in common, nothing too scientific…Innovation is much easier to accept if it’s understood.

In fact, Malaysia’s Ministry of Health (MOH) reports that sexual activities (heterosexual and same-sex) is the main source of HIV transmission in Malaysia.

The best and arguably the most effective way to protect yourself from HIV is by using condoms.

Condoms are 90 to 95% effective when used consistently. In fact, consistent condom users are 10 to 20 times less likely to become infected when exposed to the virus than inconsistent or non-users.

There you go, now you know why Malaysia’s bedroom adventures are getting so sedap.

Be sure to share this message around for Malaysians to be more aware of their safety.

And remember: No glove, no love!