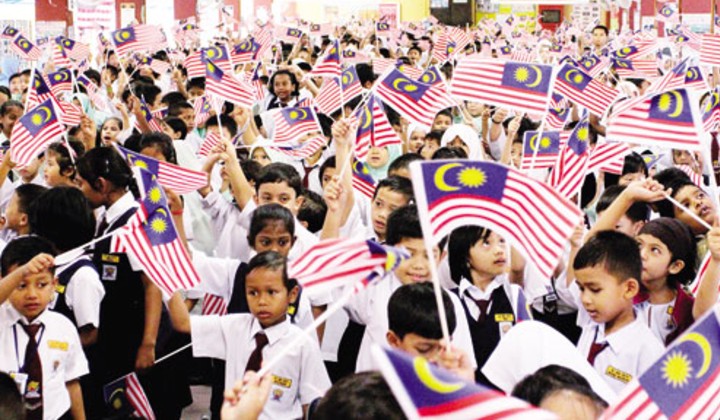 As August comes around, Malaysians will know that this month means only one thing…

In conjunction with the Merdeka celebrations happening throughout the month, we decided to take a walk down memory lane to reminisce the things we used to enjoy about Bulan Kemerdekaan back in school.

Regardless of whether you tirelessly practiced and participated in the actual parade OR just watched it on television, the parade played a BIG role in our lives.

This is because at one point or another, we all had to write that “Sambutan Hari Merdeka”essay for our Bahasa Melayu karangan.

One of the obvious signs it was Merdeka month was when your school would start playing the Jalur Gemilang song or the Keranamu Malaysia song every day during the morning assembly.

You’re even more of a champion if you remember the Jalur Gemilang RTM music video which flashed scenes of Datuk M. Magendran and N. Mohandas picture conquering Mount Everest as well as Dato’ Azhar Mansor completing his solo sail around the world mission.

Do you remember those poster competitions our schools used to have every year?

EVERY YEAR, EVERYONE would paint a huge hibiscus flower with the Petronas Twin Towers standing in the background.

Some schools also had choral speaking competitions, which we would participate in ().

Or a Merdeka day dress-up competition.

We Malaysians just love dressing up. How else could we have made sure that Penang tailor could make up to 1,000 Merdeka costumes a year.

(Although we are sad to inform you that new rules state that the Malaysian flag cannot be altered into clothing anymore– a new rule that came into effect in 2021.)

READ MORE: You Can Technically Go To Jail For Breaking These ‘Jalur Gemilang’ Rules

We’re talking about those art projects which had us collecting recyclables to be made into some form of Merdeka artwork.

For example, there was this school in Sabah that painted hundreds of plastic bottles in the Jalur Gemilang colours. They then strung them together and made them float in the sea in the shape of our beloved flag.

It was the only time of the year when we actually cared how our class looked (most probably because it was part of some competition also la).

Besides celebrating our patriotism, the best part of the day was….TO SKIP CLASS!

And to dress up in our traditional clothes (we’d never pass up the chance to NOT WEAR our school uniforms!).

Who here was born on August 31st?

Do you remember how the principal would call several lucky kids to come up on stage during perhimpunan?

Those kids would get special gifts AND the chance to blow out candles and cut a Merdeka cake since their birthday fell on Hari Merdeka.

Despite the not-so-great taste, EVERYONE wanted one of these. #FOMO

So what do you remember from your National Day celebration back when you were in school?

New Year’s Eve Celebration Canceled, The Rakyat Is Banned From Gathering Or Celebrating In Public

Why You Must Celebrate Victories, No Matter How Small

The Legends Who Took Malaysia’s Most Iconic Photographs