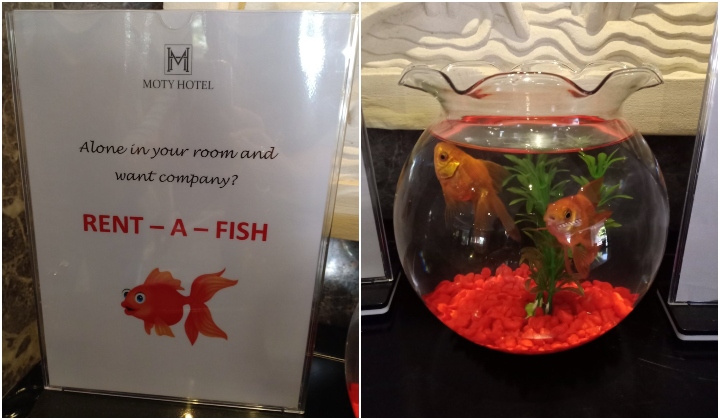 Most single travellers might prefer the company of another human being, or at least a friendly cat, while travelling solo.

Yet, a hotel in Melaka has decided to offer their lonely guests the company of a pair of goldfish instead.

Moty Hotel in Plaza Mahkota, Melaka, are offering their guests the option to rent a fish to keep them company for the night.

The hotel reportedly does not charge itâ€™s patrons for the watery companions, which have been adorably named Baby and Shark, though there is a penalty of RM100 if the pair of fish are harmed.

Besides that, guests are requested to follow several rules while renting the fish including refraining from feeding the fish without prior permission.

These rules include not filling water or soft drinks into Baby and Shark’s fish bowl (because they are apparently diabetic), avoid scaring Baby and Shark by shouting at them or tapping on the glass of their bowl (unless they call you for help, of course) and not bringing them out of the hotel (they aren’t huge fans of travelling).

Though we’ve never considered it, a pair of goldfish might just be the company we needed during those lonely nights away from home.