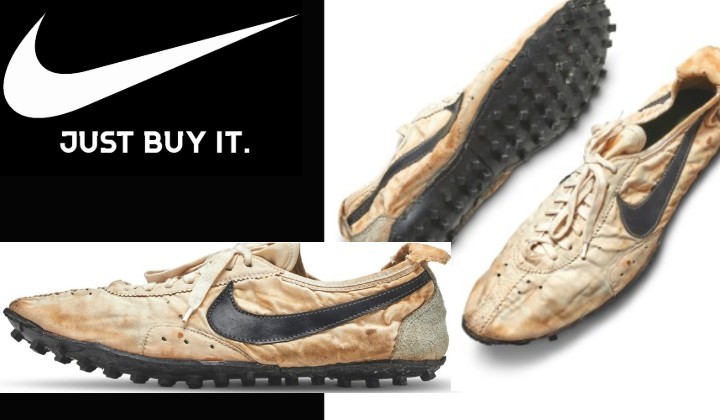 Nike fans and hype beasts everywhere, hereâ€™s a little something you can aspire to own one fine day.

Okay, yes, it looks a little raggedy and worn out but listen
up, boys (and girls)â€¦

Not only that, it broke the record for the worldâ€™s highest auction price for a pair of sneakers.

Yep, turns out these arenâ€™t just any olâ€™ pair of sneakers.
The 1972 Nike Waffle Racing Flat ‘Moon Shoe’ was designed by Nike co-founder Bill
Bowerman (who was also a running coach) for the 1972 Olympic Trial runners.

It is known for the iconic waffle iron sole pattern. The sole
was apparently created by Bill pouring rubber into his wifeâ€™s waffle iron. â€œThe
Breakfast Epiphanyâ€ happened when his wife was serving Bill waffles for
breakfast, made using an old waffle iron.

He immediately jumped up and started experimenting. As the story
goes, the waffle iron was ruined but the world was presented with a pair of
shoes that worked on every type of surface.

Fun fact: US Athlete Mark Covert wore a pair of the Nike Moon Shoe in the 1972 U.S. Olympic Trials. The shoes made in a waffle iron were also the first Nike shoes worn during competition.

However, ONLY 12 pairs were created. This shoe is especially rare because it is the only known pair to exist in unworn condition.

The lucky owner of this historic pair is an avid collector named Miles Nadal, who plans to place them in his private museum in Canada.