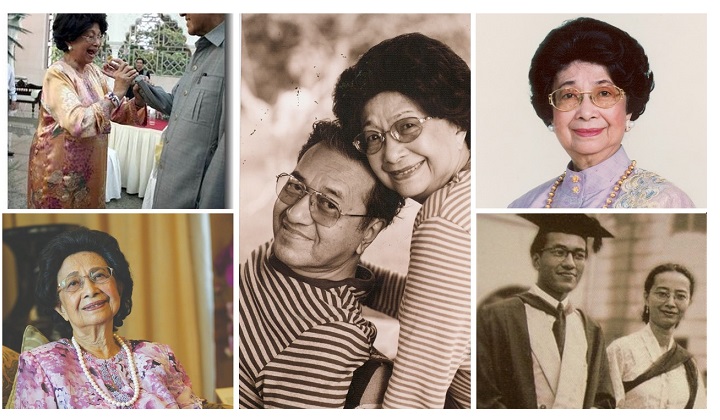 Exactly 33,945 days ago, on 12th July 1926, Malaysiaâ€™s First Lady was born into a Malay family in Kampung Jawa, Klang to a government officer father and housewife mother. She was the 6th child of 10 siblings.

But how much do we really know about her life outside of
being the wife of Tun Dr Mahathir Mohamad?

Donâ€™t worry, we did someresearch and found out a couple of pretty incredible things about our favourite First Lady!

1. She can play the violin after stopping for 70 years

A couple of weeks back, Dr Siti Hasmah had the internet atwitter when an adorable video of her practicing â€˜Selamat Hari Rayaâ€™ on the violin was shared by her teacher.

Her teacher, Endang Hyder, was full of praise for the nonagenarian- calling her a good student whoâ€™s always eager to practice.

This is an example of a good student. Tun Hasmah in time for classes, always nak practice to make sure she understand and remember the form of each songs. Playing by ear and knows where she put and compile all her notations. pic.twitter.com/2xBOOmZzWZ

But did you know that Dr Siti Hasmah had stopped playing the violin for 70 years?

She used to play as a child but put down her bow at 16 to
focus on her studies. That bow was picked up some 70 years later at the age of
86.

However, being an 86-year-old senior with failing eyesight, she has to learn the songs by heart and play by ear. Who knew she was such a melophile?

2. She was in school when the Japanese bombed Malaya

A bright student at St Maryâ€™s School in KL, she sat for her final Senior Cambridge Examination paper at the school in 1941 on the same day the Japanese bombed Malaya.

â€œOn that day, bombs were dropped on Singapore and in Penang, and the Japanese army crossed the borders into Kelantan.â€

â€œWe cried because our brother Aziz was in Singapore, and it was terrible for us.
We were very, very worried because we knew a number of medical students, university students were killed in Singapore by the bomb.â€

She never went to school throughout the Japanese occupation but stayed at home. Donâ€™t worry, she eventually went back to school and went on to have a pretty phenomenal life.

3. She is one of the FIRST Malay woman doctor to graduate from University of Malaya

Yes, the times were a little different back in the 1950s.

Dr Siti Hasmah was one of the first Malay women
to enroll for the medical course at the King Edward VII College of Medicine of
University Malaya in Singapore (now National University of Singapore) after
World War II.

It was (and still is) an incredibly prestigious institution and
our brilliant Dr Siti Hasmah got in on a scholarship.

While she was the only Malay female student in her batch, weâ€™re sure she wasnâ€™t too lonely because thatâ€™s where she met fellow batchmate and future bae, Dr Mahathir.

Despite what parents keep nagging at us about getting a boyfriend in school, she graduated as a full-fledged medical doctor in 1955.

Marriage and kids did not slow down this trailblazer.

She spent her medical career serving the rural communities
of Kedah, participating in various health programmes.

It was a challenging time, she told New Straits Times. She spoke about butting heads with bomohs, village midwives and religious teachers. There were even times when buffaloes wandered into the hospital!

However, she remained dedicated to treating the nation,
championing for womenâ€™s health, writing several articles about family medicine
and socioeconomic factors impacting Malaysian childbearing and pregnancy.

5. She is the FIRST wife of a Prime Minister to receive a Tun-ship

Thatâ€™s right, she donâ€™t need no man. She a strong independent woman!

Dr Siti Hasmah has spent DECADES advocating and
working to improve the lives of Malaysians in the fields of public health,
literacy and drug abuse control.

In the 80s, she was especially vocal in educating the youth
on the dangers on drug abuse and was even invited by former US First Lady,
Nancy Reagen to attend a conference on drug abuse in Washington in 1985.

For her tireless efforts and indisputable service to the nation, Dr Siti Hasmah was given the highest honour a Malaysian could ever get.

In 2003, this (gentle) iron lady was awarded the Federal
Award of Seri Setia Mahkota Malaysia (SSM) which carries the title of Tun.

This is the first time the wife of a Prime Minister of Malaysia was awarded the Tun-ship by the Yang di-Pertuan Agong.

There you have it, a brief snapshot of Dr Siti Hasmahâ€™s 9-decade
journey on this earth. Sheâ€™s quite a remarkable figure and her genial nature
only makes us love her more.