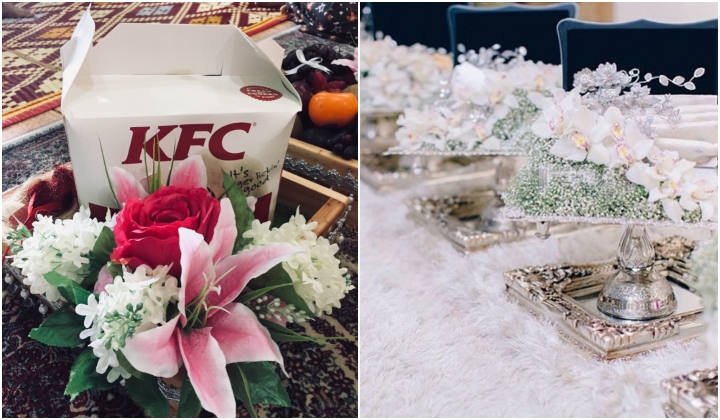 Malay wedding hantaran has been a hot topic as of late.

Some netizens are of the opinion that the amount of hantaran should be fixed based on the brides capabilities and skills, while other netizens insist that since hantaran is considered a gift it should be up to the groom to decide its value.

Based on our research, hantaran is defined as a gift from the groom to the bride. Instead of either party deciding its value, reports say that the value hantaran should instead be mutually agreed by both parties.

It is not mandatory, and should not be confused with mas kahwin (mandatory dowry for the bride in a muslim marriage. In Malaysia, the value of mas kahwin is fixed by most states).

Recently, Twitter user @ayuyuyuyuuu shared on social media how for her engagement, she asked her fiance gave her a bucket of KFC chicken as one of her hantaran.

“Because I like fried chicken so much! So yeah, 😂 I’m lucky to have a fiance who understands. Hahaha everyone laughed because KFC became one of my hantaran”

According to her, her fiance knew of her love for the famous fried chicken and when she made the suggestion to her fiance, she wasnâ€™t entirely serious.

“Has no one had fried chicken as hantaran before? At first, my fiance was like are you serious you want to have KFC as hantaran, nobody does that! But as long as it’s food, just eat it.”

However, as the date for her engagement neared, neither of them could think of anything else to give as hantaran.

“Actually, I was the one who requested for it since it’s food. Usually for engagements, food and sweets are given as gifts. But there was one gift tray left and we couldnt think of what else to have. He didn’t know what else to give me either. So I thought, why not? KFC wasn’t my first choice. See, it was last on the list.”

“Then, as the date for the engagement ceremony neared, I asked him if KFC was okay or not. He said he was just worried about who might have to go and pick it up. I told him if it’s too much trouble he could just give me something else. He didn’t say anything and was quiet about it right up til the day of the ceremony.”

On the day of the engagement, @ayuyuyuyuuu was surprised to see the bucket of fried chicken as one of her gifts and that her fiance actually had it on display as one of her dulang hantaran.

“I did not expect him to put it as one of the gifts. I thought it wasn’t going to happen. When I entered, I immediately saw the bucket and started smirking in front of everyone. People were like ‘it smells like KFC lah” hahahah I was so shy!”

Either way, she was over the moon to receive the KFC and couldnâ€™t wait to eat it at the end of the ceremony. The only downside? By the time they got to it, the chicken was cold!

“As long as it was food. Come on, it was just an engagement ceremony anyway. And it fills you up. But yeah, the chicken got cold! Hahaha, but whatever, I still ate it with my family”

Obviously, she enjoyed it anyway.