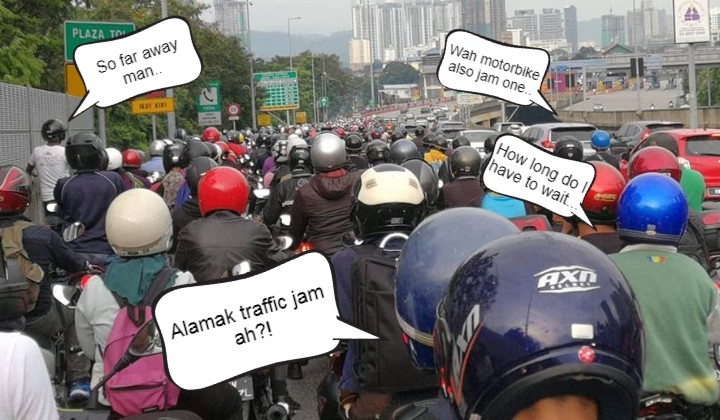 It’s tough being a motorcyclist in Malaysiaâ€¦ Riders have to deal with a lot of things from contending with the harsh unpredictable Malaysian weather to dodging big crazy cars and trucks on the highway.

Though most of us four-wheeled road users often look upon these small, agile riders with envy as they idly zip pass traffic while we sit in silence mulling over the craziness of the rush hour crunch, it rarely crosses our minds that motorcyclists have their share of depressing traffic jams too.

This particular grievance was brought to light on the Careta Facebook page, where it shared an opinion about the gridlock experienced by motorcyclists on the Ampang-Kuala Lumpur Elevated Highway (AKLEH).

The post described the irritations on the terrible traffic situation that motorcyclists are faced with while passing through the highway toll gate.

The post also lamented on how authorities were quick to blame motorcyclists rather than finding a solution for the problem.

Rows upon rows of motorcycles lining the far left lane can be seen in a photo accompanying the post, giving a snapshot of what riders go through on a daily basis in order to navigate the small motorcycle lane heading into the elevated highway.

Peeking through the comments, it’s easily deduced that this frustration is mutual among the majority of riders.

Some made the point of agreeing with the posting on how Malaysian motorcyclists, in particular, have been neglected by regulatory bodies and authorities.

“This is my daily route. Every time I get here I’d have to crane my neck to see if the car toll counter is open. If it is, thank god.”

“One can’t be expected to leave the house at 5 in the morning since office hours start at 7.30. It can be done at first, sure, but after a while, the body gets exhausted and will be too tired to go to work in the morning.”

“It’s like lining up to enter Singapore. AKLEH has to provide a convenient motorcycle lane… Yea sure we know that bikes don’t need to pay the toll…”

“If you want to keep on blaming motorcyclists. Let’s all riders make a pact to drive cars, so all roads will be jammed.”

“Safety experts don’t feel riders. Keep on blaming them. It’s the drivers who are at fault for crowding the roads. Whatever happened to carpooling?”

“Try and see how these so-called experts navigate to work, if there are those who ride bikes, they only do so on weekend rides on the PLUS highway. Try getting them to ride an EX5 to and from work every day see if they can do it…”

A few commenters also pointed out that originally motorcyclists weren’t allowed into AKLEH and that the highway wasn’t initially designed to take on such volume of motorcycle traffic.

“The highway was originally built without a motorcycle lane. It’s only after Tun Badawi (Tun Abdullah Ahmad Badawi) ordered all expressways to be open for public motorcycles.”

“Actually if I’m not mistaken motorcycles weren’t allowed on AKLEH, and I don’t get why riders would use the highway since there’s Jalan Ampang. It’s quite dangerous to ride a bike on AKLEH, there are only two to three lanes there…”

While other commenters chose to highlight the ongoing problems concerning motorcyclists and bike lanes in the country.

“It’s not just AKLEH. Even tolled roads don’t design motorcycle lanes properly. just look at the bike lane exit on the NPE by Jalan Dato Harun… If you are not careful, you’ll die…”

What remains clear is that motorcyclists have the right to the road as any other commuter, thus deserve to demand convenience and safety on their journey.

Let’s hope that our riders out there will get to see more changes and improvements towards their cause in the days to come.

Whoops, A Merdeka Parade Tank Broke Down Along Jalan Damansara