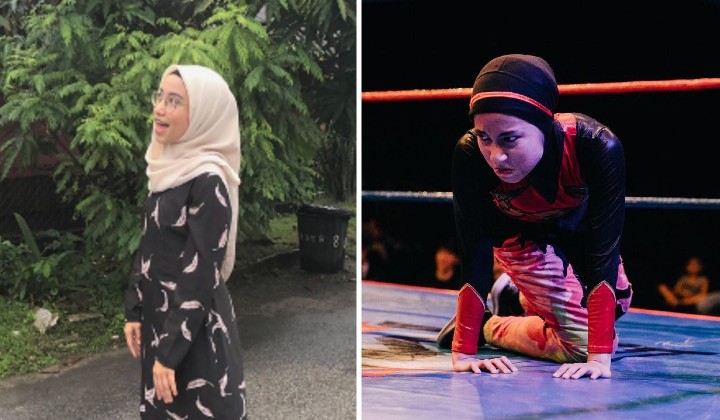 Yes, you may know that we have female Muslim wrestlers,
but did you know we have Muslim hijabi wrestlers?

The 19-year-old has 3 years experience of wrestling under her belt as she started at 16. (First a baju kurung rapper, then a hijabi wrestler, guess 19-year-olds are rocking the world now huh?)

What started out as a mere past time with her little brother playing wrestling video games then turned into a passion of watching wrestling matches.

Which then inspired her to begin looking for wrestling classes.

About 2 months after training with Ayez Shaukat Fonseka she entered the professional wrestling arena when someone needed a replacement wrestler.

She credits her courage in wrestling to her coach and teammates at MYPW.

Even though she trains with males (since she is the only other female there), they do not treat her differently. Instead, they constantly encourage her to perform various moves.

Initially, Phoenix was known to wrestle with her mask. This puzzled wrestlers, as most females would dress revealingly at matches.

So, when she took off her mask and donned a hijab instead during Singaporeâ€™s SPW: Ladies Night last year, people were shocked.

Despite how her family and friends describe her as a quiet and reserved young woman; in the ring, Phoenix is a completely different person.

My family, even my fellow wrestlers, were shocked at my persona in the ring.

You see, I am usually a quiet person. Iâ€™m not that outgoing or outspoken. But I love wrestling.

Nor â€˜Phoenixâ€™ Diana via The Sun Daily

Phoenix is truly the epitome of power. We fully support her to continuously be bold and go where no hijabi has gone.