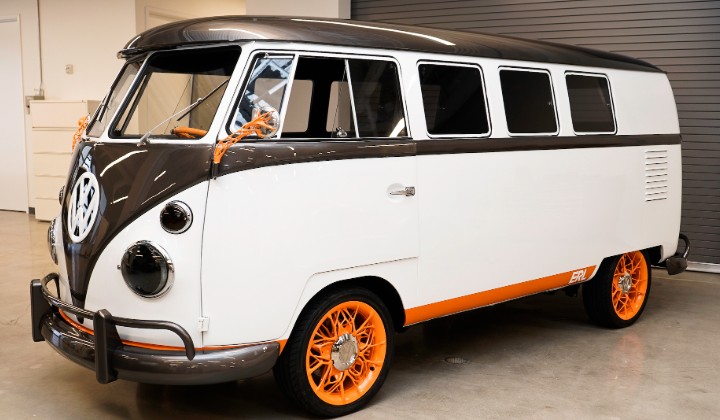 Volkswagen recently unveiled its latest concept for the Kombi and it looks amazing!

Considered to be one of the most recognisable and iconic
cars ever. The Volkswagen Type 2 bus was made popular back in the 1960s
and â€™70s. (You can thank the hippies for thatâ€¦) And continues to be a favourite
among car enthusiast and camper-life psychedelics around the world.

The car was officially discontinued in 2013 due to safety concerns. But rumors of Volkswagen bringing back the symbolic transporter had been buzzing around over the years, with the company even revealed plans to reintroduce it as a fully electric vehicle supposedly hitting dealerships in 2022.

But for now, this pimped out version of the van
unveiled at the companyâ€™s new, Innovation and Engineering Center in California
already have people going nuts.

Calling it the Type 20, this modern version of the 1962
Microbus was built for the future.

Giving it a total tech-makeover, the model comes sporting a 10-kilowatt-hour battery and a 2,500-watt onboard charger to power it’s 120 horsepower electric motor, electronics, and even two custom skateboards attached at the back.

It looks absolutely gnarly with a black, white and orange finish and retro interior aesthetics.

The car also comes with a bunch of awesome features including facial recognition systems, a touchscreen infotainment center equipped with an on-board virtual assistant, and a futuristic holographic display placed in the dashboard.

Volkswagen also partnered with Porsche to develop a pneumatic suspension system for this concept, allowing it to be raised and lowered on command.

Even the custom steering wheel dons a freaky spider-web like design.

Just look at those rims!

Unfortunately, donâ€™t expect to see one of these babies in the streets anytime soon.

For now, the carâ€™s remains nothing but a concept design, meant only for decoration and display at the companyâ€™s plant in California.

End of an era: The last Volkswagen Beetle to roll off factory floor this week