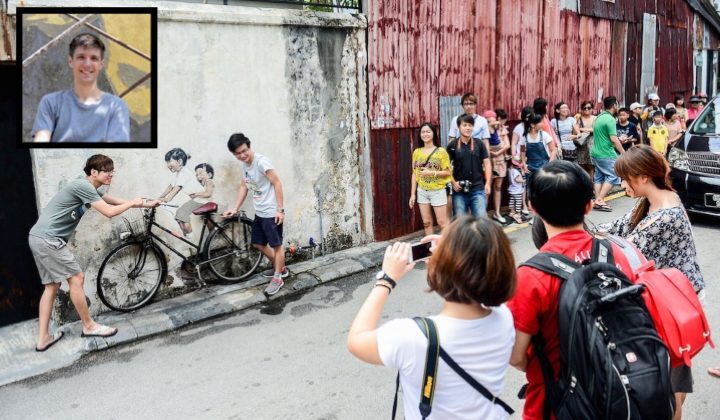 Penang is one of the must visit places for tourists who come to Malaysia. Even to local Malaysians, Penang is a favourite long-weekend getaway spot.

Is the damage caused by overtourism worth all the income generated by promoting our country as a travel destination?

Lithuanian artist Ernest Zacharevic, the same man who painted the famous Children on Bicycle mural on Armenian Street in Georgetown, Penang, doesnâ€™t believe itâ€™s worth it.

In a recent post on Instagram, the artist voiced his dismay over the gentrification that is happening to the UNESCO World Heritage site.

The fading kids on bike are still there, the people are still linning up for pictures, but today is not a regular day at Armenian Street. The steet has not been the same as it used to when I first moved there, quiet heritage street with few local residents offering antiques or 6RM haircut on a ground floor of their family home has been replace with souvenir shops, restaurants, and all kind of insta friendly quickly consumable concept stores to satisfy ever increasing traffic of holiday goers looking for ‘authentic penang experiance’. One of those had been torn to ground this morning, just weeks since its grand opening. Not exactly sure of reasons but local goss says they had no proper building permits for such a construction and did not cooperate with council to address that. As much as I feel for the business owners who put their money and effort to open this shop I can’t hide the joy of seeing council actually acting on its promises and enforcing the regulations that they established. It looks brutal but I don’t think there is a polite way of demolishing a building. This part of Georgetown is a unesco haritage, and it has been threatened with the removal from unesco list due to failure to protect its culture, architecture and the community. Myself and many others blame my work for Armenian Street being a center of tourist route in Penang and honestly I’ve been contemplating of simply painting over it in hopes to put an end to that circus. But I think the time where it would make any difference has passed. You can barely see the artwork anymore but people are still lining up there. And if not kids on bicycle people will line up for something else. End of the day art does not issue construction permits, sell entire row of heritage houses to foreign investors, give out business licenses, docking permits to cruise boats or opens new flight routes. It’s something to be strickly regulated especially in culturaly fragile places like Georgetown. We can only hope that what happen today will make business owners think twice before thay open another bubble tea shop or 3d art museum in this town. #penang #georgetown #gentrificationsucks

Ernest explained how the street was no longer what it was when he first came to Penang.

Once a quiet heritage street with local residents selling antiques or RM6 haircuts from the ground floor of their homes, he now likens the street to a circus – filled with people lining up to take pictures with his mural or shop at overpriced souvenir stores while looking for an â€˜authentic Penang experienceâ€™.

He goes on to explain how Georgetown is under threat of being removed as a UNESCO World Heritage site due to the failure of preserving the rich culture, architecture and the community that was there.

Blaming his own mural for catalysing gentrification in the area, Ernest contemplates painting over it in hopes to put an end to the circus.

His followers on Instagram, both local Malaysians and foreigners, shared his woes.

Ernest’s Children on Bicycle mural was part of a collaboration between himself and the Georgetown Festival 2012, an annual art and culture event. Besides this mural, Ernest painted several others around Georgetown too.

Do you agree that there are too many tourists in Penang?