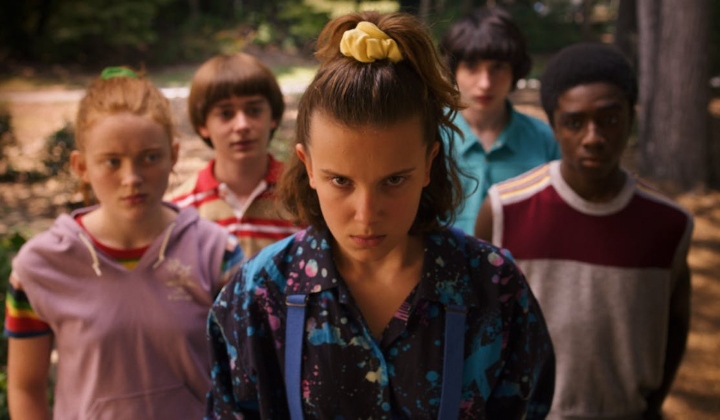 Itâ€™s been a year and a half since Season 2 of Stranger Things, and we canâ€™t wait for the release of the full third season TOMORROW!

In celebration for the upcoming release, Netflix threw a screening party at TGV, One Utama on Monday (July 1). It was the first time Netflix hosted an event of this scale in Malaysia. And boy, did they bring the Upside Down to us!

For the event, they invited Malaysian cosplayer Saakira Izumi, who attended the event dressed as The Demogorgon – the terrifying humanoid creature originating from the Upside Down.

Fun fact: Saakira (an avid Stranger Things fan) created the Demogorgon costume on her own, from scratch, specifically for the screening.

The screening party premiered Stranger Things Episode 1: Suzie, Do You Copy? (No, we didn’t get to watch the whole season). And we’re here to give you a SPOILER FREE review of it with five things we LOVED from the episode.

Thereâ€™s nothing more adorable than the innocence of two young people in love.

Mike has come a long way from the anti-girls (euw, cooties) immaturity of Season 1 and the longing he felt towards El while they were separated for most of Season 2.

In Season 3, the two are now in their early teens and exploring love and relationships, but in the young love kind of way where all they want to do is spend time alone and make-out. It is SO ADORABLE, YOU GUYS!

Hopper has found himself suddenly the parent of a teenage girl. And he is quickly learning that raising a teenage girl is no easy task, especially one who can move things (and battle monsters from the upside down and slam doors) with her mind.

Hopper and Elevenâ€™s father-daughter relationship was one of the main storylines in Season 2, and the directors are keeping that dynamic well into Season 3.

Watching Hopper taking up the role of over-protective dad and trying to intimidate Mike into submission is (and will be) hilarious to watch.

3. The sentimental sadness Joyce has for her fallen boyfriend

We loved that the first episode of the new season acknowledges Bob Newbyâ€™s sacrifice to save Will Byers and the rest of Hawkins.

As Joyce Byers experiences some PTSD from the tragic incidents of Season 2 which led to Bobâ€™s death, it paints an extra layer to Winona Ryderâ€™s character.

Joyce Byer is more than just Willâ€™s mum. Sheâ€™s her own character with her own demons.

Sure, the Dustin/Steve bromance is pretty awesome. But Steveâ€™s new co-worker at Scoops Ahoy, Robin, steals the show in episode 1.

Played by Maya Hawke, (the daughter of Uma Thurman and Ethan Hawke) Robinâ€™s character is as interesting as she is b*d*ss. And we canâ€™t wait to see more of her in the coming season.

5. The gang is all grown up

The Stranger Things gang are older now and the passage of time has affected our favourite characters.

Moving into their teenage-hood, theyâ€™re going through a lot of changes. This change brings forth a level of maturity, and it appears that the days of playing D&D in Mikeâ€™s basement are long gone.

But saying goodbye to that makes space for more complex narratives for each individual character, which keeps the series refreshing to watch even in its third season.

Are you excited for tomorrow yet? Happy bingeing!

[Review] Sorry We Laughed At Your Penis, Kavin Jay