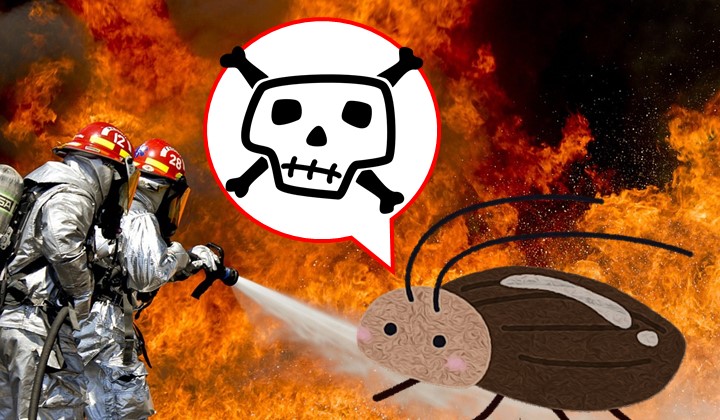 PSA: THIS ARTICLE HAS NO COCKROACH PICS BECAUSE THE WRITER IS SUPER GROSSED OUT BY THEM, SEKIAN.

According to this report, cockroaches have become more resistant to, well, everything.

The nasty pest which can already withstand nuclear fallout is developing cross-resistance to multiple classes of insecticides.

In just one generation, the cockroaches increased their resistance to the insecticides by four- to six- times. Considering that they have a 3-month reproductive cycle and have up to 50 offspring each time, it won’t take long for them to just be… invincible.

Of course, this study was done in America, but the fear is universal.

So here are TRP’s suggestions for dealing with those terrifying creepy-crawlies without giving them invincible resistant Hulk powers:

SS15 is the literal cesspool of humanity and all the cockroaches (and rats) there have already developed an immunity to poison, humans, and possibly God.

Baby Hulk-cockroaches might climb into your car and fester in the air-cond. Don’t even risk it, not even if the bubble tea there is irresistible.

If you can’t smack ’em, trap ’em. Then just burn the whole thing, because it may probably survive the slow and inevitable death being stuck to industrial-grade glue.

3. Scream really loudly when you see them

Pray that the sound of your screams will strike fear in their non-existent hearts and they would hopefully fly away from you… Hopefully.

4. Like just die I guess, if they fly at you

If they fly, it’s too late. Give up, life is over.

5. Smash them with rolled up newspaper

What we asians do better is smacking things with anything we can get our hands on. Cue cockroach-smasher #1: the newspaper roll.

6. Smash them with wooden clog shoes

If you have even been hit with one of these, you know this is a weapon capable of incredible violence. It’s like a 12/10 on the sakit scale.

Cockroaches stand no chance against them. CRUSH THEM!

7. Smash them with your hands (then amputate yourself)

However, if you don’t have anything in reach, your sole and final option is to smash it… with your hand. It’s your most desperate measure, but sacrifices must be made.

Remove thy dirty limb and cast it from light, for it is now forever tainted.

8. If there’s too many to smash, just burn your house down.

Got Yourself Some Fresh Cut Flowers? Here Are 7 Tips To Care For Them Properly