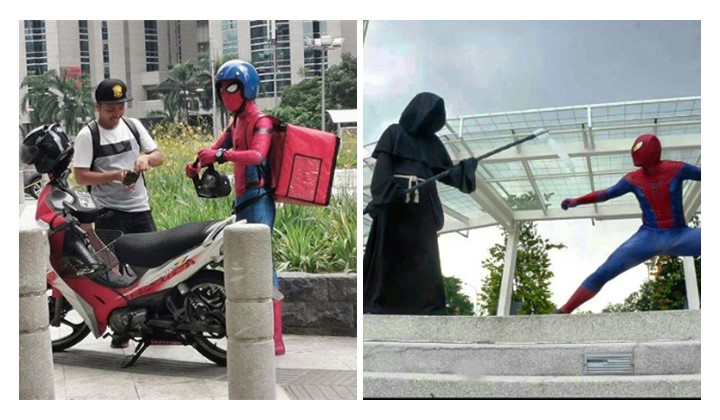 Malaysians are truly feeling the financial pinch as KL becomes a more expensive city to live in.

This applies to superheroes as well, and you’d be surprised at just how much Spider-Man has to hustle to make it in Malaysia.

Yes Spiderman was here in 🇲🇾 guys ! Just keep your eyes open because he might be on your roof 😏

Apparently it’s too dangerous to swing through the rooftops, so while he’s here, Spider-Man has to take Malaysia’s public transportation… even if it takes him a while to figure it out.

He’s finally got on the train, but he still can’t be a regular passenger like a normal person.

On days when his web-shooters are being repaired, he has to rely on a trusty bike to get the job done.

Besides, taking photographs and pizza delivery just doesn’t pay the bills anymore. Spider-Man is diversifying his portfolio for financial independence.

Sometimes, his uncle (not Ben) may need help manning a kedai runcit… But at least he gets to sit down and contemplate the loss of almost all his parental figures.

Then he also realizes he needs to pull himself out of his existential crisis and put on a brave face for the kids… he is a public face, after all…

…and children absolutely love him.

Besides, on his off-days, he fights the Grim Reaper in a duel to the death to bring back Uncle Ben. (He has yet to win, evidently, but Death humors him and finds him funny.)

Side-hustling doesn’t stop him from paying his Zakat Fitrah for the less fortunate too… As always, with great power comes great responsibility.

Be a good citizen. The world will probably be a better place if we all were a little more like Spider-Man (minus the dead uncle parts).