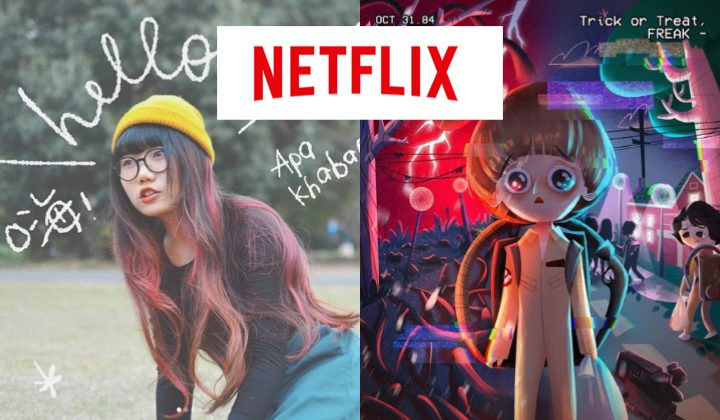 As part of their promotional campaign for season 3 of Stranger Things, Netflix approached 18 artists from around the world to reimagine 18 episodes from seasons 1 and 2 of the popular online streaming series.

Among the 18 artists selected was a Penang-based local artist Lyn-Hui Ong.

Hi! Sorry for being absent a while! I went to Tokyo and just got back recently! Here’s a rare photo of me sitting in a park at shinjuku admiring all the adorable giant crows. *Swipe* to see some of my doodles from Japan! I miss Japan already!! The food, the cats, the people and all the heated toilet seats ! How was your month? I hope it was good 🙂

Just like the other artists, Lyn-Hui was asked to create a poster reimagining one of the episodes from seasons 1 and 2 of Stranger Things.

For Lyn-Hui, she was given episode 2 from season 2 titled, Chapter Two: Trick or Treat, Freak.

In the episode, which premiered along with the rest if the season on 27 October 2017, one of the main characters, Will Byers, sees something terrible on Trick or Treat night, aka Halloween.

*swipe to see details* I know Iâ€™ve shared this in my story before but it still feels unreal! I was given the opportunity to work on this commission illustration among 17 artists worldwide for Netflix for the #StrangerRewind project, which means season 3 is almost here AHHH !!! Seeing my work being featured with my idols such as @kimjunggius @jean_jullien & @suntur is incredibly insane! Thank you for all the kind messages you guys sent me, love you guys! 😭💛 â£ â£ â£ â£ â£ #drawing #doodle #illustration #illustrationart #illustrator #artistoninstagram #sketch #art #childrensillustration #kidlitart #characterdesign #artoftheday #byler #strangerthings #finnwolfhard #noahschnapp #mikewheeler #willbyersâ£

Nothingâ€™s gonna go back to the way that it was. Mad Max by @mauricioaraujosousa Trick or Treat, Freak by @lyn_hui The Pollywog by @porliniers

FYI, Lyn-Hui Ong is a graphic designer and childrenâ€™s book illustrator raised in Penang, Malaysia. A graduate of advertising and graphic design, she is the co-founder of ForReal Studios, working with publishers such as Hinkler Books and Odonata Books.

In her free time, she creates fan art of her favourite movies, shows, cats and comics which aim to educate people about how to deal with grief, sharing her artwork on her Instagram.

Congrats Lyn-Hui! We look forward to seeing more of your awesome artwork recognised!