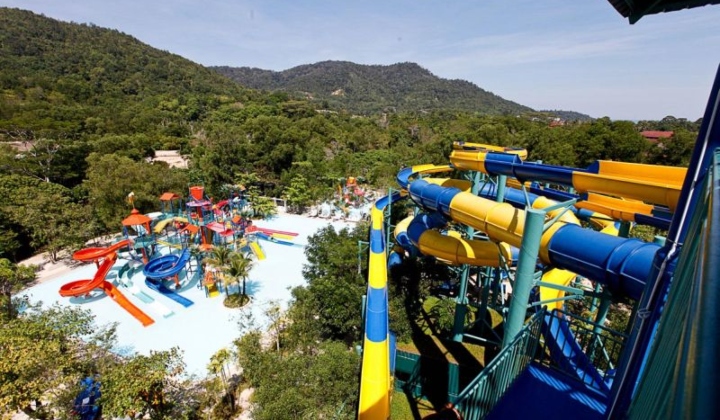 The water slide at the Escape Theme Park in Teluk Bahang is finally completed and scheduled to open during the second half of October 2019!

Initially meant to open in August 2019, the world’s longest slide will take riders across Jalan Teluk Bahang to the suspension bridge before plummeting into the park’s swimming pool.

Since the slide is expected to stand 78m tall, part of the Phase 3 development of the ride includes the installation of a cable car that will transport riders from the foot of the hill to the top.

â€œIt will also serve as a transport vessel for Hill Rider and Tubby Racer, two new attractions that will open together with the water slide.â€

So, get ready to book your tickets to the park, thrill-seekers!

FUN FACT: Itâ€™ll take you at least 4 minutes to ride down the worldâ€™s longest water slide.

Escape Theme Park in Teluk Bahang, Penangâ€™s newest installation is a 1,140m-long slide. It begins from the hilltop and will have you zipping through treetops and past main roads before landing into the parkâ€™s swimming pool.

Donâ€™t get too excited yet though, cause the slide will only be officially opened in August after security checks are conducted.

Upon completion, it will break the record for the Worldâ€™s longest water slide currently held by the 602m-long water slide in Action Park, New Jersey, United States.

Escape Theme Park chief escape officer Sim Choo Kheng explained that the park’s topography was fully utilised for the slide and protecting the trees in the surrounding areas was the biggest challenge in the construction process.

“I am overly concerned over the environment here so we tried our best to maintain the greenery by not chopping down the trees. We reckon the slide will be the main attraction when completed.”

â€œMost of the materials were transported manually to the hilltop as we wanted to preserve the surrounding natural habitat.

â€œTo build a slide this long would require building a tower, about the height of a 20-storey apartment, which is not only cost prohibitive but also a disaster aesthetically.

So we decided to use the highest point of our forested land with an elevation of 70m as the launch tower.â€

Breaking records while preserving our country’s natural landscape! Now, this is how you build a theme park!