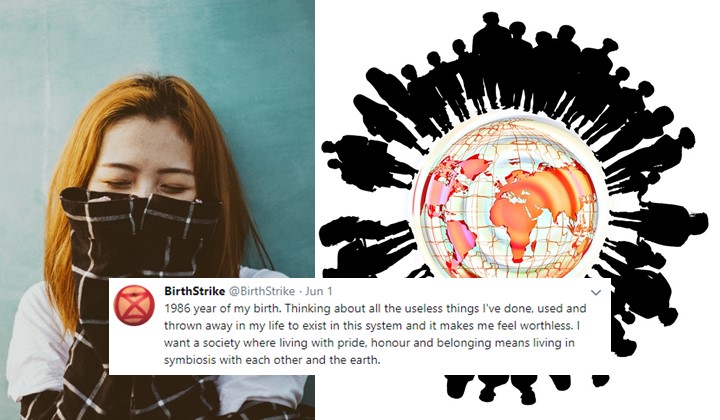 Children are by-far the largest contributors to carbon emissions, and the climate crisis in general. Having one less child equates to saving 58.6 tonnes of CO2-equivalent per year.

It makes sense, as having one less person means a significant amount of energy reduced, from breathing to food to resources such as clothing.

BirthStrike is a movement to not bear children due to the severity of the ecological crisis and the current inaction of governing forces in the face of this existential threat.

With the catastrophic direction our climate is heading, more and more women are deciding that they don’t want to bring any more children into this world.

It’s not that they don’t love children and don’t want children, but rather that they love children so much they can’t bear for the future generation to grow up in a world in a constant state of crisis.

Instead of parenting, participants are channeling their time and energy into campaigning for activism and social change.

Catriona, 22 “People are dying because of climate change. People are losing their countries to rising sea waters. 200 species become extinct every day. How can I bring a child into this world when things are only getting worse?” #birthstrike #ExtinctionRebellion #systemchange

According to their official website, BirthStrike stands for fast acting and deep change towards an equality based, sustainable, caring, and non-violent future for humans and between all life on earth.

Common motivations to join BirthStrike include insecurity of the future and despair at our species’ relationship with the ecosystem.

â€œThe natural world is collapsing around us. I couldnâ€™t bring a child into thatâ€

Blythe Pepino is the founder of @BirthStrike, a group of women not having children because of climate change

Founder Blythe Pepino spoke to CNN about how she has given up having children over her fears about climate change.

I really want a kid.I love my partner and I want a family with him but I don’t feel like this is a time that you can do that.

It’s only natural that parents want the best for their children. Why would you willingly subject your child to a world with pollution, droughts, and food shortages?

For many would-be parents, the knowledge of climate change stops them from even having children at all.

Bringing a child into the world requires a lot of considerations and discussions- financially, mentally, and physically. For more and more people, the state of the world’s climate and sustainability is now part of that consideration.

Oliver Graves, 25 “Right now I need a certain number of things to happen and for our trajectory to change course, big time, before I can accept that we have attained a future suitable for starting a family in.” #birthstrike #extinctionrebellion #systemchange #EcologicalBreakdown

There has to be change made now so that future generations can grow up without constant fear. There may not even be time for the younger generation to grow up by then.

I think what people are having trouble getting their heads round is that we canâ€™t leave this for the next generation to solve – by then it will be too late.

Those who want or have children can look at reducing consumption and lightening their carbon footprint to help. The Earth’s resources are finite, though human greed and consumption can definitely be infinite.

Malaysia Airports Refuse To Sell Fuel To Iranian Airlines, So No More Direct Flights To Tehran