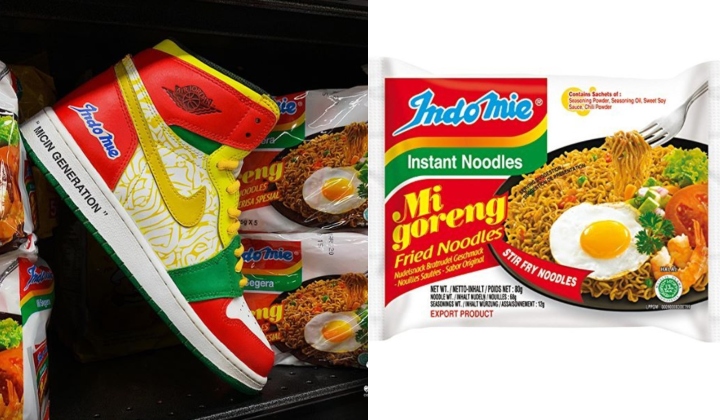 Ah…Indomie. Just the mere mention of it has us salivating for those salty fried noodles. They go so well is so many things..telur mata…burger…and apparently, a pair of Air Jordans too.

Mr. Simply Custom or @mr.s.custom according to his Instagram handle, is the online alias of Jonathan â€œJonasâ€ Gustana. The 23-year-old Indonesian university graduate is a Singapore based artist who makes customised sneakers with hand drawn art as a personal hobby.

A week ago, he saw a photoshop rendition of a pair of Nike Air Jordans with an Indomie design on Instagram and was inspired to bring it to life.

â€œFor the Indomie custom design, I was actually inspired by a Photoshop rendition posted by @arifwhy on Instagram a week ago. I merely brought his design to life.â€

Jonas Gustana via The Star

Jonas then immediately got in touch with @arifwhy to ask permission to use the design for a physical pair of Air Jordans.

â€œI just thought it would be cool to have an actual pair of Air Jordans with the Indomie design. I think itâ€™s a cute way of expressing oneâ€™s loyalty to an Indonesian food brand that has also gained popularity in other countries.â€

Trust us, the shoes are more than cute.

Jonas took the retro Nike footwear, which originally comes in black and white, and gave it a splash of red, yellow and green – paying homage to the colours found on Indomie packets.

Below the characteristic Nike swoosh, Jonas added the Indomie logo and patterned the shoe with yellow noodle-like shapes. How is it so beautiful?!

The eye-catching design also has â€œMicin Generationâ€ written on the heel, an ironic reference to the Indonesian term for millennials who have grown up consuming too much â€œmicinâ€ aka monosodium glutamate (MSG), which, if we have to be honest, Indomieâ€™s probably uses very liberally in its dry seasoning powder.

Jonasâ€™ Nike x Indomie sneaker has over 8,000 likes at the time of writing.

According to an interview by The Star, the recent graduate from the Nanyang Academy of Fine Arts in Singapore has since opened a limited order for 20 pairs of custom Indomie Air Jordans due to the high demand he was getting from his followers

Although Indomie is pretty cheap, Indomie sneakers are not. Jonas said he sells each pair for RM960. He has received orders from all over the globe, including those living in the United States, Thailand and Singapore.

BRB while we go eat some Indomie while staring at these shoes weâ€™ll never have.