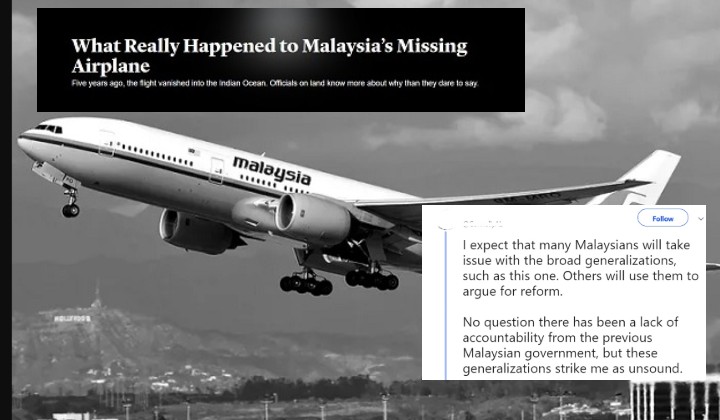 The Atlantic, an American magazine, recently published an article titled â€œWhat Really Happened to Malaysiaâ€™s Missing Airplaneâ€ on its website.

The lengthy piece written by William Langewiesche, however, was met with criticisms of resurrecting conspiracy theories long abandoned as well as painting the Malaysian government -old and new- as incompetent with broad assumptions.

The Malay Mail was especially startled by the article’s insinuation that Captain Zaharie Shah, pilot of MH370, hijacked the plane, reviving an old and unproven murder-suicide theory.

Another US based site, Daily Beast, was also highly critical of The Atlantic’s article, stating that it was “blaming the pilot on the basis of what amounts to little more than hearsay.”

Due to the severity of these assumptions, the article also under fire from netizens for its broad assumptions on Malaysian politics and the captain himself.

Research Fellow in Southeast Asian Political Change and Foreign Policy at the International Institute for Strategic Studies (IISS), Aaron Connelly, was one who was vocal in pointing out generalisations:

I expect that many Malaysians will take issue with the broad generalizations, such as this one. Others will use them to argue for reform.

No question there has been a lack of accountability from the previous Malaysian government, but these generalizations strike me as unsound. pic.twitter.com/sWrMRIPoFX

He also pointed out how the article did not discuss the captain’s political beliefs and the correlation with the government change.

But the article primarily errs in failing to explain Captain Zaharieâ€™s political background, and the change in government that occurred last year. The two are related. 3/x

Why does this matter? Two reasons. First, at the time, some pro-government activists argued that Zaharie had crashed the plane in protest at Anwarâ€™s conviction. It is important to note that no evidence of such a motive has ever been revealed.

This complicates Langewiescheâ€™s narrative about Malaysian government incompetence and venality in two ways. First, the previous government under Najib Razak had an strong incentive to pin the crash on Zaharie â€” stronger than any incentive to protect an SOE. But it did not.

Second, the current government has divergent incentives. On the one hand, it has argued that the Najib government mishandled the incident and the aftermath, and presented itself as a more competent alternative.

Langewiesche has forgotten more than Iâ€™ll ever know about airplanes. The article is a compelling, heartbreaking read, and I suspect heâ€™s right about Zaharie. But his portrayal of an entire political system as incorrigibly dishonest does not serve the interests of good analysis.

There were also general criticisms on the emphasis of Richard Gibsonâ€™s portrayal as the â€œwhite-saviourâ€ in the article. The American is an amateur beachcomber who helped locate MH370 debris washed up ashore in Mozambique and Madagascar.

The Malay Mail also stated that Richard’s portrayal in the article was “almost glowing” while the internet had thoughts as well.

All this long-ass article, the tl;dr is basically:
1. American Blaine Gibson is the “hero”
2. Malaysian govt is the villain

Nice try to set up the plot for the next blockbuster hit, Hollywood https://t.co/iziMtbmMU1

Good read. Though the article feels heavy of heroism by a selfless white man coming to the rescue of uneducated, lawless savages. Would prefer if the writer sticks to just plain facts instead of bravado. I did Google Blaine. At least he’s real😳

The disappearance of MH370 is a tragedy thatâ€™s still a sensitive subject for many Malaysians as the families of the missing persons struggle to come to terms to this day.

We may never know what truly happened to MH370 and
discussions on its disappearance is an extremely difficult subject.

You can take a look at The Atlantic’s article HERE