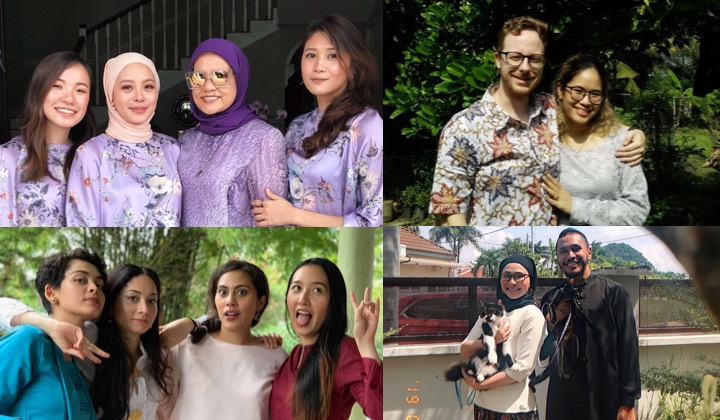 Recently, we had the opportunity to speak to a few reverts after they celebrated their first Raya as Muslims.

Islam believes that everyone is born with a innate faith in God, and thus people who later “convert” to the Islamic faith prefer the term “revert” as they feel it better reflects their natural state.

These recent reverts have agreed to share their stories:

As newly-weds, Rizrin and Pearl shared their first Raya as husband and wife this year.

Raised a Christian-Chinese, Pearl did not have much experience celebrating Hari Raya until recently.

They mentioned the largest culture shock was the assumption of knowledge.

“You grow up doing something all the time that it feels like the norm and you’re expecting other people to know it as well,” says Rizrin, “but they wouldn’t know.”

Pearl did not know what to expect during the ceremonies and was gently guided through the habits and customs by her in-laws.

One concept that Pearl found different was the Malay concept of open houses, where invitation is implicitly given.

Pearl states that even for Chinese New Year, the hosts often have to give invitations to visiting guests on certain days, whereas Malay families leave their doors open for anyone, even strangers.

Raya packets were also given to any kid, regardless of any relation (or lack thereof), which links back to the Islamic teaching of sharing wealth.

She found that traditionally-Malay Raya celebrations were a lot more open and relaxed than expected, and is excited to take part in more celebrations with her in-laws.

Viko reverted to Islam 6 years ago in Australia, but only met his wife in 2017. The New Zealand-born Samoan fell in love with Dini almost immediately when they met in Malaysia.

For Viko and Dini, they said that they didn’t realize how lonely they were until they found each other.

This year, he celebrated his second Raya. Having had time to be come familiar with the customs, he has become much more comfortable and less nervous than last year. Viko thoroughly enjoyed the extravagant Raya celebrations, saying that Australia didn’t have the same large celebrations.

Celebrating Raya this year was special for Viko, as it would be his first with a large family. Initially nervous, he soon found peace by going to the mosque for Solat Raya and salams with his new-found family.

“I felt like it was one of the coolest things, to see everyone humble themselves towards their elders like that,” Viko says of the salam ceremony.

Malaysian Muslims salam by using both hands to clasp the right hand of their elders and bowing deeply, sometimes lightly touching the elder’s hand to their forehead as a clear sign of respect.

His advice for reverts is just to be present, allow yourself to be surprised and enjoy the experience.

American-born Will reverted 3 years ago to marry his wife, Alissa. He has since celebrated Raya with his in-laws.

Since Will has been living in Malaysia for 8 years, he is familiar with Raya customs but has never truly experienced it until 2 years ago.

He says that he felt a little lost at first, as Alissa had a huge family compared to his. He had started to lose track of family members and their names.

Will likens Raya to Christmas, seeing similarities between how families come together to celebrate and the large amounts of food involved.

“I purposely made him more biased towards ketupat daun palas, which is the version [of ketupat] from the northern states.” says Alissa. “Instead of nasi himpit; itâ€™s pulut!”

Alissa and her family were eager to show him the ropes so he had great experiences during Raya, and hopes that he can take part in cooking traditional Raya dishes like ketupat and rendang next year.

Eleena chose to revert this year to join her family, who had reverted 10 years ago. Her reverted Chinese family fasts during the holy month of Ramadan, but does not celebrate Raya.

Eleena is engaged to be married, and is grateful to be able to celebrate Raya for the first time with her future in-laws.

Since it was her first Raya experience, she too needed guidance from her future in-laws on the Malay Raya customs.

“They had to teach me how to eat by hand. I didn’t know which rice dish (ketupat, lemang, etc) was supposed to be paired with what,” she says.

“I just whack only until I got told off by people that is not how I’m supposed to eat it.”

She hopes to be able to fully enjoy Raya next year with her fiance, and his family.

Have an interesting story to share? Drop us a line on our Facebook page and let us know!