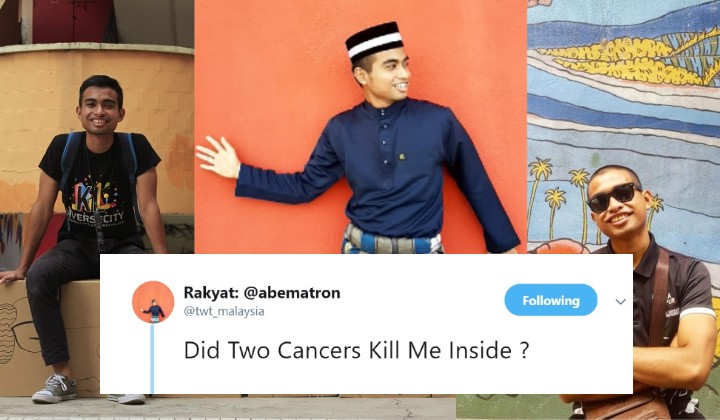 Sometimes, itâ€™s easy to forget how blessed we really are for simply being able to enjoy our health.

Then, thereâ€™s people like Mohamad Nor Imran bin Mat Shah (aka Meran) – a young man who was diagnosed with not one, but TWO forms of cancer.

Yet, he still smiles and lives life to the fullest.

Through the twt_malaysia Twitter account (where heâ€™s this weekâ€™s curator), Meran shared his incredible journey that tugged at our hearts and thousands of Malaysians on Twitter.

(WARNING! BE PREPARED TO CRY…. A LOT)

Barely out of his teens, Meran was diagnosed with stage 2 Hodgkin’s
lymphoma at the age of 19. Hodgkinâ€™s lymphoma is a cancer of the white blood
cell (lymphocytes) that typically start in the B cells.

Although he was having recurring fever and fainting bouts, he initially brushed it off but then he found a lump growing between his legs.

He was diagnosed with stage 2 liver cancer.

He was in pain.

The medications he took was incredibly powerful. Meran spent his nights vomiting and hallucinating. He weighed only 48 kgs. The doctors gave him 10 months to live.

10 months. Doc gave me 10 months. It killed me inside. I was mourning my life for about a month. But then, I realized one thing, death or life of a person depends on God. Why should I mourn over something that is not sure?

A Change of Heart

Spurred by this thought, he started reading. Devouring books
and novels that inspired and motivated him.

He began volunteering. Trying to cheer hospital patients and giving them presents. He also began feeding the homeless â€œSomehow, it cured me inside,â€ he said. â€œTheir smile is miracle. It gives you strength, more than any tablets could give you.â€

To keep the morbid thoughts away, he kept busy with clubs,
societies and even joined the Reserve Officer Training Unit (PALAPES Darat) to
keep fit.

Miraculously, it worked and Meran was declared cancer free in 2018!

But his joy was short-lived.

He kept having diarrhoea and there was often blood in his stool. Yes, itâ€™s happening again.

Meran was officially diagnosed with stage 3 colorectal
cancer in January 2019. The cancer was so advanced that it was close to
spreading to his bloodstream.

That didnâ€™t stop him from living his life though. Meran
continued with his PALAPES activities, spending 3 weeks training in the jungle.

Blood was continuously coming out of his anus. He dealt with it, putting tissues in his underwear, changing discreetly, and soon began wearing sanitary pads.

More bad news, the cancer was spreading to his liver.

â€œOne after another, He tested me. But itâ€™s okay. I said to myself, ‘Your life journey would be wonderful after this, Meran.’â€

He then decided it was time to start chemotherapy in April.
The first cycle of treatment was horrible. He was nauseated all the time, vomiting
and incredibly weak.

The second cycle was no better. He was losing his hair and decided to cut it all off. According to him, â€œBald is sexy what.â€

Change came by his third chemo session; the effects were less severe. By the fifth session, the doctor said, â€œI’m so amazed with how your body reacted positivelyâ€¦ If this happen continuously, you could be free from cancer sooner.â€

Meran was overjoyed and thankful to God for the good news.

He is still undergoing treatment but keeps a positive
outlook. He ends the tweets with these words of wisdom:

â€œPlease accept all the God’s fate wholeheartedly. Only then, you can be grateful with what u have and be happier ever after.â€

When we asked him on his hopes for the future, Meran said:

â€œI just want to finish my studies as soon as I can. Who knows… If I can get well sooner, I can continue the Graduate Officer programme in the military reserve force of the Malaysian Army (ATM) to pursue my dream.â€

We truly wish the best for Meran and pray for his recovery. You can read his full story on Twitter below:

Did Two Cancers Kill Me Inside ?

Back in 2015, when I was still 19 years old, I’ve been diagnosed with stage 2 hodghkin lymphoma. That time, I was still studying in my foundation.