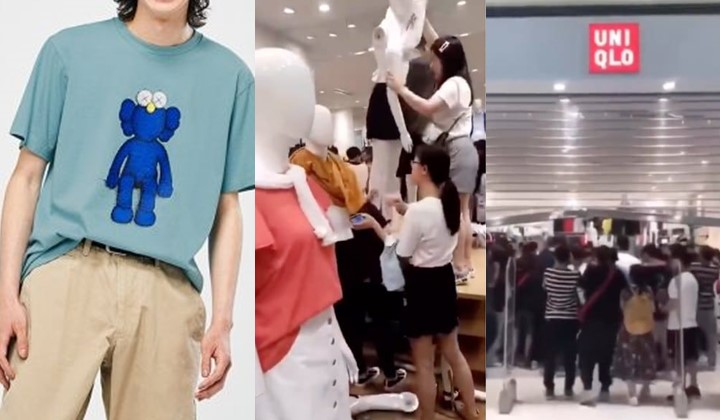 Even as we watch the slow descent of human decency and common sense, at the very least we can agree that Uniqlo has once again brought in a very coveted t-shirt collection.

The Kaws: Summer collection had people losing their minds, with huge crowds in China and other Southeast Asian countries buying whole stocks and people pulling shirts off of mannequins.

2019 #Kaws X UNIQLO series products released in the Chinese mainland were sold out within minutes after going on sale Sunday midnight. Some customers even came to blows in order to get the clothing. Some 99 yuan ($14.33) T-shirts are being resold online for about 200 yuan. pic.twitter.com/F3ec2J6vTf

Even some Malaysians have tried anything and everything to get their hands some Kaws.

The thing I hate, uniqlo staff place kaws shirts on the table and a guy with 2 full baskets literally push ALL last 6 L sized shirts i want into his basket. Like, bro, you’re a size M!! He’s definitely reselling. Why no in store limit for kaws?? 🙁 #sad @Uniqlomalay @UNIQLO_JP

The Uniqlo Malaysia online store is already sold out of the Kaws Summer collection, priced at RM59.90 each.

Some netizens on Weibo, in startling self-awareness, have even said that they don’t care about the shirts.

â€œI finally understand now,â€ one Weibo user writes: â€œWhat I love is not UNIQLO, nor KAWS â€“ what I love is to rush and clash with all these people!â€

The mob mentality over this limited edition collection clothing is astounding, but it’s definitely not unheard of.

As an upstanding citizen of society, sitting comfortably in your chair (probably with one leg on top of the other), you may be telling yourself that you are educated and smarter than this and you will be wrong.

According to researchers from the University of Exeter, humans are pretty much programmed to make bad decisions.

History is our best teacher, and Malaysians have had their fair share of mob mentality that defies logic.

The internet never forgot the Minion Craze of 2013.

…Or the time we trampled two elderly women to death for free food coupons.

Mob mentality shouldn’t be the default, though it takes some effort to get out of the groupthink.

The best way to stop mob mentality is to resist the Malaysian in you and not join the crowd.

Like if a store us only selling 200 iPhones on sale and there are 11,000 people in front of you, maybe just walk away.