The restaurant owner is losing money and worried as the freeloaders come daily during the election campaign. 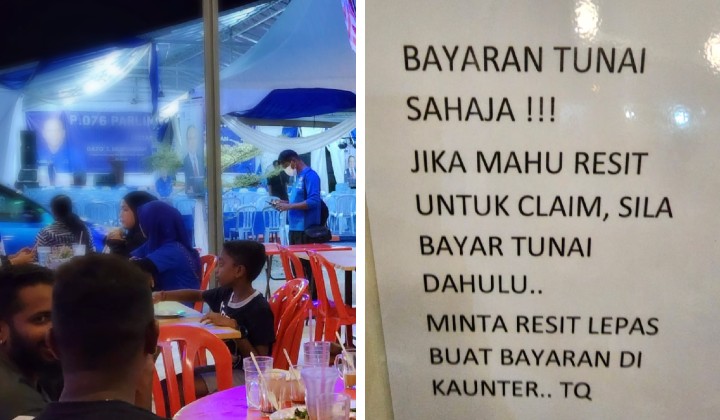 Restaurants and coffee shops are popular spots during elections for obvious reasons.

Political party supporters need to eat and drink after an arduous day of campaigning.

Eateries are also the usual campaign grounds for political parties.

For that reason, many political parties set up their operation centres and ‘ceramah’ spots near eateries.

But for a Malay restaurant in Jalan Sultan Abdullah, Teluk Intan, having a political party next door had been a nightmare.

The owner, who declined to be named, told The Rakyat Post that she is losing money each day since the election campaign started.

After they eat, the unscrupulous customers would claim that the political party next door would foot the bill. They would then simply walk away and it’s not like we can stop them.

Teluk Intan restaurant owner on how the customers evade from paying for their meals.

However, there will be disputes when she tries to get the political party to pay.

The reason is because the political party could not confirm whether the customers, who had already left, were indeed their supporters.

Some customers also asked for receipts, on the grounds that they will come back to pay after making a claim from their political party.

As a deterrence, she put up a notice in the restaurant telling customers that they must pay first to get a receipt.

The owner, a senior citizen in her 60s, said she losses more on weekends as the restaurant is always packed with political party supporters.

She can’t wait for the election day to come and put an end to the problem.