Zoe received two free bags from Charles & Keith, one from their Gabine collection and another from their Charlot collection. 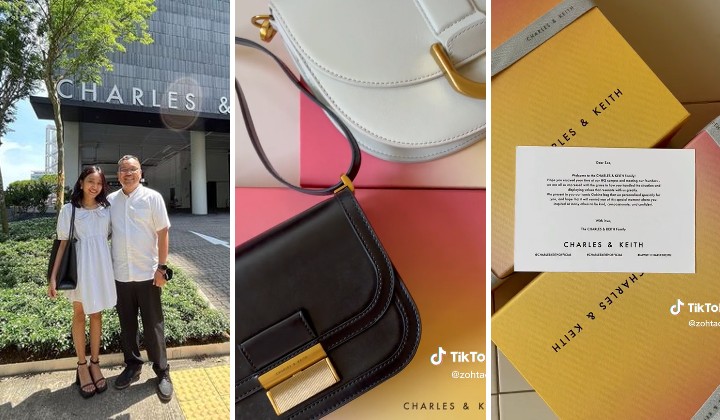 Recently, Zoe Gabriel, the teenager in Singapore who went viral on TikTok for her Charles & Keith (C&K) video, also did an unboxing video of free bags from the brand. Her video hit 6 million views and 812K likes at the time of writing.

After Zoe and her dad were invited to go on a tour of the C&K headquarters where they also met its founders, Zoe received two free bags from them as gratitude for how gracefully she handled cyberbullies in her viral video.

She received two bags from C&K; a personalised Gabine bag in white and a Charlot Bag in black.

She posted the TikTok video to express her gratitude to her followers and the public for supporting her. Many congratulated her and expressed how happy they felt for her.

How did she get there?

The TikToker was first criticized for labelling a C&K bag a luxury brand. Then, she did another video addressing the mean comments by saying that the bag was a gift from her dad and he worked very hard for it.

Her videos went viral and many people – worldwide, started to show support for her, agreeing that luxury is indeed subjective.

Not only did her videos attract international eyes, but they also attracted the founders of C&K.

READ MORE: Teenager Criticized By Netizens Over ‘Luxury’ Bag Gets An Invite By Charles & Keith

This goes to show that not everyone has the same understanding of luxury. Some items may not cost thousands of dollars (or ringgit) but it’s the appreciation of the items that makes them a luxury for some.