The list of Chinese New Year movies this year includes the usual comedy, drama, sci-fi, and even horror! 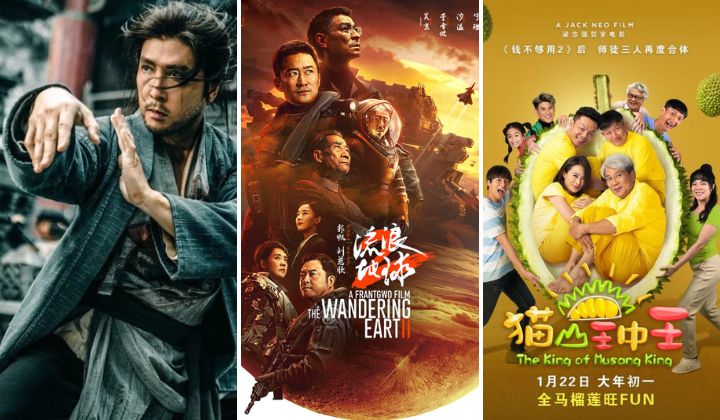 In the blink of an eye, Chinese New Year is once again upon us! Here are some films you can watch together with your family and friends during the festive week.

Based on a bestselling 1960s wuxia novel by Jin Yong, Sakra is set in the early days of the Song dynasty. Donnie Yen plays Qiao Feng, a skilled martial artist and leader of the Beggars’ Sect (a gang whose members are all alleged to be Song people).

He was suddenly accused of being a Khitan (enemies of the Song empire) and that made him a pariah to his friends and allies.

On his journey to find out about his origins, Qiao Feng meets new friends and eventually finds out he is a pawn of a mastermind’s deadly trap.

A criminal named the Godfather broke out of jail in order to complete a mission given by his boss. His task is to swap lotto balls to win a prize worth $100 million. After recruiting an actor who’s in need of money to help his sick daughter, Godfather soon realizes there’s a bigger thing at play in his boss’s plans. This comedy stars Mark Lee, Jack Lim, and Patricia Mok.

Xiao Pang is a mischievous boy who is not interested in studying but loves to eat. At the end of their wits, his parents promised him a mobile phone if he does well in his exams. However, he soon develops a phone addiction. When his parents called in a renowned child psychologist, Dr Ke, to help, Xiao Pang went missing. The film stars Louis Lau, Tommy Kuan, Beauty Teoh, Danny One, and Eric Lin.

A scandal breaks out when it’s revealed that a famous supermodel might be abusing her daughter. This triggered the rich and famous to rush to take sides and the same happens in the legal field, resulting in an attempt of a cover-up.

Based on a novel of the same name by Liu Cixin, the second instalment tells the story of life in space in the future. In the first film, humankind joined hands to form an ambitious global project to build powerful engines on Earth’s surface and propel the planet away from impending doom.

At the same time, protests have broken out to demand the restart of the controversial Digital Life Project, which digitises human beings after they have passed. The tensions soon escalate with the protestors planning to sabotage the Wandering Earth Project by attacking the Ark Space Station.

When Mei Ling finds out that her daughter Kiki wants to further her studies in France, she takes it upon herself to learn French and earns more money so that she could follow her daughter.

7. The King of Musang King

Mei Lian’s husband left her for another woman, leaving her to tend to her late father’s durian plantation on her own while she raises her three children.  She wants to pass down the business to her children but not all of them share her passion and vision. She soon develops feelings for her childhood friend Mao Shan but her ex-husband Jin Shui returns to the picture after 20 years.

8. Someday Or One Day

In 2019, 28-year-old Li Zi Wei and 17-year-old Huang Yu Xuan felt like they have met each other before. After an accident kept them in a loop, they realized that they once shared a true, deep love for one another across countless timelines but it came with a deep price.

This local film that’s shot in Penang tells the story of our heroes from the Civil Defence Force (APM), St John Ambulance (SJAM), Lions Club, and the Volunteer Fire and Rescue Department (PBS) who put their lives on the line. This time around, can they make it home safely for the Chinese New Year?

During a heist, a security escort steals the diamonds and flees. Two other security personnel Yau Shing and Jelly are forced to help the robber track the diamond. The group soon stumbles into a secluded village and clashed with the strange villagers while being haunted by a female ghost.

Journey to the West: Sawah Padi Road is a Malaysian parody of the popular tale of the Monkey King. The two-episode movie can be viewed on Youtube.