If Mechamato stays in the top spot until 3 February, it will be the first foreign animation in Japan to win the Anime Fan Award. 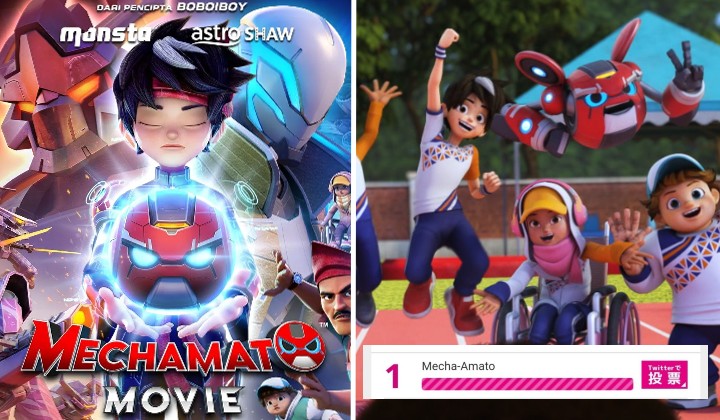 Mechamato, the animated series is now the number-one series at the Tokyo Anime Award Festival (TAAF2023).

The Malaysian cartoon series reached the Japanese market earlier in October last year on Netflix. Now it has become one of the favourite animated series in Japan.

With the market there, the show is dubbed in Japanese with voice actors such as Ayumu Murase as Amato, Yoshitsugu Matsuoka as MechaBot, Ryoko Shiraishi as Pian, Emiri Kato as Mara and Satomi Otani as Deep.

These voice actors are quite well-known for their work in other famous shows in Japan and they are among the reasons Mechamato gained popularity there.

Nizam Razak, the founder of Monsta and the show’s creator, recounted the days when they found out who was going to voice the characters. They didn’t expect they could get such an amazing and talented lineup.

Mechamato is currently number one as they compete with other Japanese animated series at the Tokyo Anime Award Festival 2023.

If Mechamato can remain in the top spot until 3 February, it will be the first non-Japanese animated product in Japan to win the Anime Fan Award.

Votes are counted daily so show your support for our local animation by voting for Mechamato here. Just remember to set your Google to translate to English to understand the page better.

Mechamato is a Malaysian animated series produced by Animonsta Studios (also known as Monsta), focusing on a boy named Amato and his partner robot, Mechabot who fights against bad robots. Mechabot is a robot that can mechanise random everyday objects into a high-tech device.

The show is set before the BoBoiBoy franchise (it is said that Amato is the father of BoboiBoy) in Kota Hilir (inspired by Bandar Hilir, Melaka).

Not only that, fans from Singapore, Indonesia and the Philippines also came to Malaysia to watch and support the new Mechamato movie.

On 5 January, the movie hit a collection of RM34 million after 28 days of screening, exceeding its cost of RM30 million.

It’s actually a prequel to the series, recounting the story of how Amato first met Mechabot in a crashed prison spaceship. There, Amato eventually becomes mechabot’s new master, leading them to be pursued by an evil alien named Grakakus.