A small group of people could be seen chasing the crow around a car after it stole money from a roadside stall. 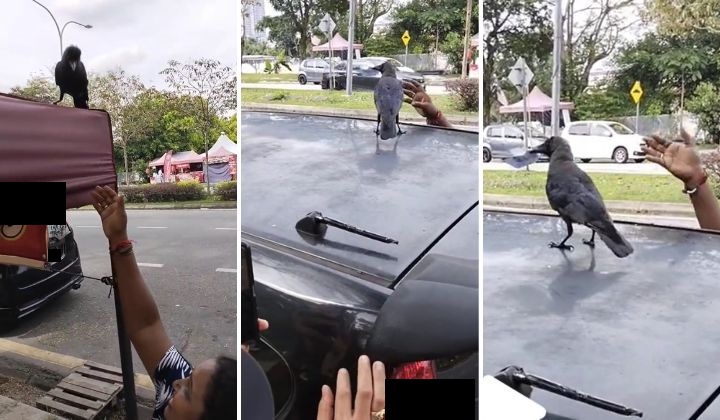 A woman recently had to play kejar-kejar with a cheeky crow when the bird allegedly stole an RM1 note from a roadside stall in PJS 4, Petaling Jaya.

In the clip, the crow could be seen jumping on the roadside stall tent and away from anyone’s reach.

The crow also jumped on top of a car and a few people could be seen chasing the cheeky bird around the vehicle to get the money back.

After what seemed like forever, the crow finally returned the money to the woman.

In another video, a man, believed to be the roadside stall owner, jokingly told off the crow for disturbing his business with his antics.

He willingly “bribed” the bird with an RM1 note so the bird would play far away from his business and the crow agreeably took it before flying away.

Netizens couldn’t get enough of the crow’s antics and said how smart it was.

A netizen said luckily, the bird took one ringgit and nothing more, while another person asked why the crow wasn’t given food in exchange for the RM1 note. #CrowsRightsMatter

Another netizen who claimed to be the stall owner said the crow is collecting taxes from his business.

Crows are part of a group of birds known as corvids, which includes birds such as jays and ravens, according to Science.org.

Corvids have brains that are unusually larger than the other birds. Thus, they are known to be intelligent and capable of using tools, recognizing human faces (so don’t be mean to these birds) and understanding physics.

There have been stories of crows stealing money (or a credit card). In these cases, these birds learned through observation and trial and error. They can also be allegedly taught to carry out these small crimes.

Often, crows bring humans random trinkets as gifts for paying them attention or for feeding them. So that could also mean that crows understand gratitude.

Burger Lovers Get To Taste In-N-Out In PJ For One Day Only!

Son Allegedly Assaults Mom For Not Keeping The House Clean